All this week I am discussing a topic that is a popular one on this site and amongst UK fans: jersey retirement.  UK has not retired the jersey of a player that has played at the school since 1993 (Mashburn).  But, in the last 20 years, certainly there have been quite a few great players to come through Lexington, and I feel there are FIVE that have earned a jersey retirement.  I have already hit on the 2 most obvious, Tony Delk and Tayshaun Prince.  But, as a part of this post, I also argue against 1 player day, not to minimalize that player’s career, but to highlight that this achievement is truly for the best of the best careers, and some guys just don’t stack up with the legends.  Already, I have argued against Wayne Turner and Rex Chapman.  Here is the schedule for the rest of the week and the posts from Monday and Tuesday:

-A player’s “likeability” has no sway for me.  Rajon Rondo was not well-liked while at UK, but belongs up there more than Ramel Bradley does.

With that said, let’s look at the 2 players for today: KEITH BOGANS AND CHUCK HAYES 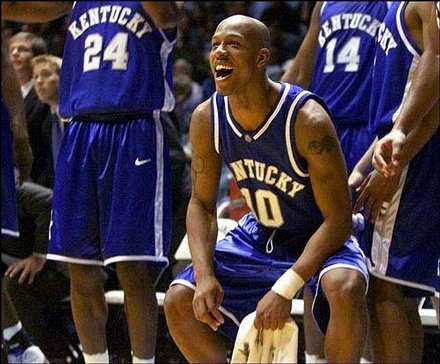 LET HIM IN (Keith Bogans)

Bogans is one of those guys, like Prince, who doesn’t have the team success that we’ve come accustomed to for legends at Kentucky.  But his individual numbers are far too good to leave him out.  He is the 4th leading scorer in school history, and his junior year was a DISASTER.  There are 33 players who have scored less points than Bogans and are in the rafters.  And of those 33, 26 of them did not win a title at UK.  So, let’s not act like everybody has a title in the rafters.  Bogans senior year might be one of the best individual seasons at UK in the shot clock era.  And his injury in the 2003 tournament ruined UK’s chances at a Final Four.  So you know his impact.  To me, Bogans is a slam dunk.

KEEP HIM OUT (Chuck Hayes)

I paired up Bogans and Hayes on purpose because I think their careers are a great example of somebody I think should be in the rafters and somebody that I vote no.  Let me first say that I think there are FIVE players that should have their jersey’s retired, but if you asked who my first guy on the cut line is, it would be Chuck Hayes.  He played significant minutes all 4 years, and was a team leader his last 2 years.  He did a lot of things well, and rebounded at a great level.  But he never was higher than 3rd on the team in scoring.  Bogans was an All-American in his senior season, something Hayes never was.  Even though team success is not a huge factor for me, Bogans won 1 more SEC title than Hayes, and each had the same NCAA Tournament success.  That thin line between the career of Bogans and the career of Hayes is where I draw the line for the jersey retirement honor.

Hayes is also one of the rare examples of where I use my gut more than the numbers.  I remember watching Hayes and loving his effort.  One of my 10 favorite players of all-time.  Probably got more out of his talent than anybody.  But I also don’t think he was as impactful a player night in and night out as Prince and Bogans were.  Hayes was limited on the offensive end much of his career, as seen by the fact he only ranks 40th in all-time points despite 4 years of good minutes.

If they put Chuck Hayes in the rafters, I would honestly have no problem with that.  I consider the honor to be an ELITE honor that only a couple players a decade might earn.  But Hayes is very, very close in my book.  I would just have to vote no.  And comparing to Keith Bogans is a good reason why.