I really enjoyed putting my argument out there on why Tubby Smith should absolutely be in the rafters at Rupp Arena.  A national championship winning coach with a higher winning percentage than Joe B. Hall and a piece of an SEC title in 7 of his 10 years.  But, what about the players?  Certainly, since Jamal Mashburn was put up there, no player has received the honor.  UK changed it’s rules a bit on the qualifications to earn a retired jersey, but for the sake of this post, we will ignore that.  So, what I am going to do each day this week is make an argument FOR 1 player and AGAINST 1 player on who I think should be in the rafters.  Here is what the schedule is looking like:

-Whether or not a player was well liked by the fanbase carries no weight for me.  Which is why Keith Bogans gets in and Chuck Hayes does not for me.

With that said, let’s look at the 2 players for today: TONY DELK AND WAYNE TURNER 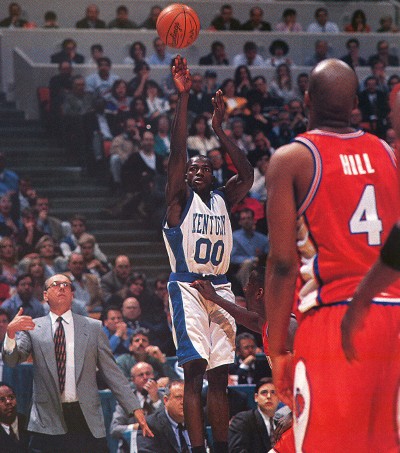 LET HIM IN: Tony Delk

OK, I shouldn’t really have to convince anybody about Delk.  He has the individual numbers, the team success, the awards and accolades, and was loved by fans.  He’s what a retired jersey resume should look like, and his recent induction into the UK Hall of Fame means he is very likely to be the next up in the rafters. 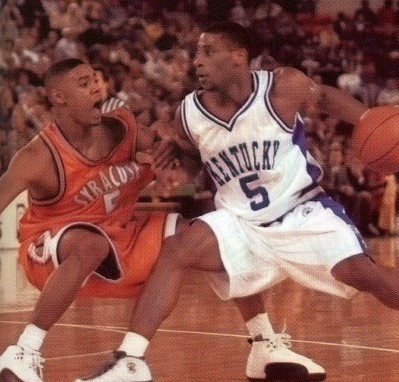 KEEP HIM OUT: Wayne Turner

I’d love to know if there was a player that will split the fanbase on this topic more than Wayne Turner.  And it usually revolves around what you find most important to earn this honor.  For those that think great team success is most important, you can make a case for Turner.  He was incredibly key in the 1998 title run and had an iconic game against Duke that season.  In 1996, Turner played a little over 13 minutes per game, which was 9th on that team.  Did he play?  Sure.  Was he instrumental?  Not really.  Look, his ring is the same size as Tony Delk’s from 1996, but I think people have skewed his role on that team some as the years have passed.

Now, as I said, individual accomplishment and stats are the most important thing for me.  Turner does hold the school record for steals in a career, but in the grand scheme of stats, that one ranks behind points, rebounds, assists, and maybe blocked shots.  Delk’s 5th overall in points is more impressive than Turner’s 1st in steals.  But the thing that sways me most to voting no on Turner is the little bit under the heading AWARDS.  If Turner was such an amazing player, why was he never voted higher than 3rd team All-SEC?  Why was he not a Final Four MOP?  He doesn’t have the kind of individual accomplishment that I think it required.

Turner was a very good player.  But he benefited greatly from the talent around him.  I would argue that if you put that kind of talent around Cliff Hawkins, he could have had some pretty decent stats too.  I think earning recognition is the rafters at Rupp should be a VERY DIFFICULT thing to accomplish.  It fact, there are 6-10 players there now that probably don’t deserve it, but simply were a part of championship teams.  If that is the standard, then allow Jeff Sheppard, Antoine Walker, Walter McCarty, Doron Lamb, and Terrence Jones into the rafters too.  I would not, and because of my higher standards, I would keep Turner out.

OK, now you have the chance to fight it out over Delk and Turner in the comments (mostly Turner).  And throw some other guys out there too.  I love this topic.