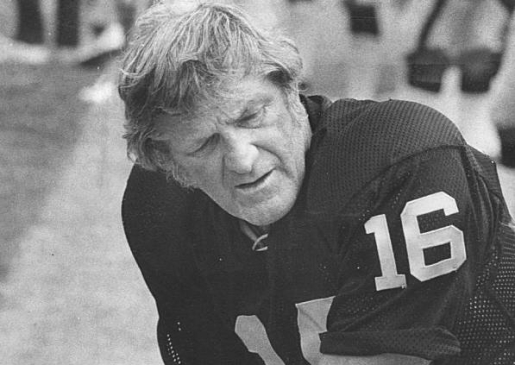 Until Dermontti Dawson was elected to the Pro Football Hall of Fame in 2012, UK had only produced 1 Hall of Famer in its football history.  I think most people know who that is, but to me, it seems like this man goes unnoticed when talking about the good points of UK football.  George Blanda is that guy.  Blanda is generally considered one of the 15-20 best quarterbacks in NFL history and holds a bunch of records that stand today.  Those include:

To me, Blanda is hands down the best player to ever play at Kentucky.  So why is this not a slam dunk like Dan Issel is in basketball?  Is it because of the era that Blanda played at Kentucky?  I understand that most of our fans don’t remember the great days of the mid-1940’s.  But even still, shouldn’t we highlight this man more than we do?  Blanda died in 2010, and I don’t remember him being honored at a game in my lifetime.  I am certainly not saying it didn’t happen, but I just don’t remember there ever being a big celebration for him.

Could part of the reason be his numbers and success while at Kentucky was only so-so?  In his 2 years starting at Kentucky, he only went 13-6-2, with the Cats winning a bowl in 1947.  Clearly the passing game was not highlighted greatly by those Bear Bryant teams, as Blanda only completed 120 passes in those 2 seasons, throwing for 14 touchdowns.  But I would argue so what?  Especially in football, and especially at Kentucky, a person’s pro career is just as important and celebrated as the college one.  Until Dawson was elected to the Hall of Fame, I would imagine many younger fans didn’t even know Dawson played at Kentucky.

Not to compare ourselves to Louisville but they put up a statue of Johnny Unitas in their football stadium.  The same Unitas that had a LOSING RECORD while at Louisville.  George Blanda won a bowl game while in Lexington.  Why doesn’t UK have a statue for Blanda?  Essentially, UL is only honoring Unitas for his contributions and successes in the NFL.  And I think it’s a good thing.  That statue is shown during every televised UL game.  UK should do something similar for Blanda, who is probably the most notable UK player in history.  (maybe Randall Cobb will pass him soon)

Am I off-base?  Is George Blanda a forgotten man when it comes to UK football history?  And should UK do more to promote and highlight the career of 1 of their now 2 Hall of Famers?