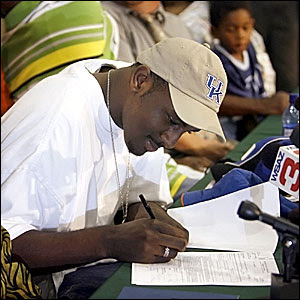 As part of our celebration of KSR’s 5 year anniversary, on Friday’s we are going back in the archives for some of this site’s biggest moments.  Today we take a look back to the committment of Patrick Patterson, which was at the time the biggest hits day for the site.  First, you can read the article written by unnamed writer about the event, and then some of the good/funny/stupid comments from you, the fans:

Two days ago on this very blog, we called it Black Monday. Three high school recruits picked other schools for various reasons and it looked as if Kentucky could end up with no new signees for 2007 and a roster that was, to put it mildly, guard-heavy. But oh how the world can change in 48 hours. Patrick Patterson, the recruit thought to be the longest shot for UK, picked the Cats, ending a two-year odyssey that had made him the most famous UK recruit since a guy named King Rex. With that commitment, Kentucky not only vastly improved its team next season and for the forseeable future, but it also sent a signal to the college basketball world. The Cats are back on the recruiting front folks, and the days of “below average Kentucky talent” are coming to an end.

This day has been a long time coming both for the program, and Kentucky fans. Patrick Patterson has spent the past year on everyone’s lips, with individuals who heretofore had no knowledge of recruiting following his every move. Everyone has a story of a Patterson question or comment over the past season and as Patterson’s ubiquitousness seemed to know no bounds. His visit to UK during Midnight Madness was a spectacle, with fans chanting his name and spotting him at activities all around the city. His games in Kentucky were highly attended affairs that featured multiple “We want Pat” chants. And the cities of Ashland and Huntington produced boatloads of UK fans making their intentions clear for over a year. Everyone wanted Patrick and the Patterson talk dominated all recruiting chatter for over 12 months.

And then just like that, it ended. Patrick sat down at a table with three hats and he picked up the worst looking of the group aesthetically but the best looking for the fans in attendance. In so doing, he gave another injection of excitement into a basketball community that has been falling over itself with giddiness in the past few weeks. Already there are naysayers and those who attempt to ruin the moment. At the head of that line is Jeff Goodman of Foxsports who criticizes the Patterson’s for not letting Florida and Duke know the result before the press conference. Of course what Jeff fails to say is that if they had let those schools know, Jeff and other recruiting gurus would have found out the result prior to the announcement from loose-lipped assistant coaches of the two losing programs (notoriously free with info) and ended the surprise of the Patterson announcement, thus upstaging the kid. That is a win for Jeff Goodman, but a loss for Patrick Patterson. Goodman criticizes the Pattersons for having the entire family talk and take in the moment….but I applaud it. I found that to be refreshing…..a family enjoying a moment hard-earned…..and in the process making the media wait. Good for them, no matter what Goodman says.

And my 6 favorite comments from the 160 total on this post:

“Congrats all around! This is huge, as Matt has stated so well, for UK basketball. People will see that we are back. WE feel as if we are back – because we are. BCG is in the process of putting UK back at the top of the heap of college BB. Thanks Coach. Now go take a day off, buy a house, and re-load on Dr. Pepper!  Let’s have Midnight Madness at Commonwealth Stadium so more of us can enjoy the moment! Isn’t all this fun??!! I wonder who BCG will recruit next?”

“i will make a love explosion on patrick’s face”

“Yes, with 0 minutes under his belt, Patterson has already claimed his spot as the best Kentucky player ever. =)”

“Important person here is Legion- I think having a familiar face with such talent helped us tremendously. I love how Legion says us. He is a Cat the second he stepped on our campus. I agree he will be our best player. He is already my favorite. GO LEGION!!!! Tear it up.”

“I think the Patterson signing is just the type of event that can be considered the defining moment in the turnaround of our beloved UK basketball program. You made a great point in saying that right now, it doesn’t really matter how successful Patterson will be at UK, what matters is that the rest of the college basketball world has been put on notice that UK is back.”

“The Big Blue Nation can now raise it’s collective middle finger to the rest of the college basketball world and say F-You, we’re back. There will be no rest for the butthole coaches out there like Pitino, Donovan & Coach K while BCG is on the job. The minute those jerks think it’s okay to relax for just one second, Billy-G will be out there recruiting circles around them. “