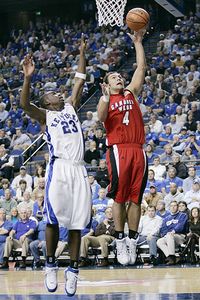 As part of KSR’s 5-year anniversary, we are going back into the archives to find some of the memorable moments in UK lore during this half-decade and how KSR covered them.  Today, we look back at what had to be the low point in those 5 years, the loss to Gardner-Webb in the 2nd game of the Billy Gillispie era.  Below you will find the KSR article plus some comments from you, the readers:

I am truly stunned. As I look back at the part of UK basketball that I have followed diligently (post 1984), this may have been the worst loss that UK has ever taken. To be run off the court at home to Gardner-Webb, a team that is starting Freshmen and transfers, is absolutely unbelievable. I said on the radio show yesterday that Kentucky fans would have to accept a loss or two this season that were difficult to take. I would have never dreamed it would be to Gardner-Webb and it would be in the form of a complete rout. Lets face it, Kentucky was never in this game and never really contended to win. That is amazing to say.

There are many things about this game that I cant understand. I cant understand how Ramel and Joe make the mistakes they make as seniors. I cant understand how it looks like the guys that want to win the most on the floor are Freshmen. And I cant understand how UK can simply look lost against a team that runs an offense based on back cuts and three point shooting. But maybe most of all, I dont understand how there seemed to be no adjustments made at any point in the game strategically to try and change the flow…..it is truly baffling. Billy Clyde had the team stay up late last night watching film and run through a full practice today….all this after playing last night….far be it from me to question coaching methods, but that sounds suspect. There are a lot of UK fans who planned their yearly vacation on going to New York next week and watching the Cats….I hope that extra practice session today at full speed paid its required dividends.

This loss is unbelievably bad. Let me be clear at the outset of this that I think Billy Clyde is a great coach and will do great at Kentucky. But this is a very low moment. Sure the talent is not heavy…..but there is more talent than Gardner-Webb. Sure the depth is not there…..but there is more depth than Gardner-Webb. You simply dont lose at home to Gardner-Webb…..you don’t. And if you do, you don’t do it by being dominated on both ends and losing by 16 points. That is simply ridiculous.

I hope someone can prove me wrong, but I do believe this is the worst loss in UK’s recent history. Don’t give me 1991 Pittsburgh….that Pitt team was a Big East school with some talented players who took a cup of coffee in the NBA. This is Gardner-Webb…..at home….by 16. There are many reasons this loss is bad, from the national embarrassment it will cause to the potential harm in recruiting with important prospects making up their minds this week. But all of these ramifications take a back seat to the simple realization of what just happened…..we lost to Gardner “freakin” Webb. Hopefully we will wake up in the morning and realize this is all a dream and I didnt just watch that…..yeah, lets just assume that is the case.

Gardner-Webb…..two words that will live in infamy in UK history. Ain’t life strange…..

And now the comments from that day that stood out to me:

“This is the lowest point in the program since before Pitino. We must give BCG some time and I too think he will do well, but losing to Gardner-Webb is unthinkable.  Also, Bradley will NEVER be a point guard. Ever!!!”

“I’ve got this really sinking feeling that BCG is headed for DUI #3 if this keeps up.”

“im not umping ship, but this is pathetic, flat pathetic, this season, we can expect 13 losses and i wont be suprised, that was pitiful, injuries arent an excuse, that was flat terrible.”

“what is sad is the fact that we just got kicked all over the court, out run, out smarted, out played and roughed up by about 3 white guys that were quicker, smarter and could shoot much better…”

“Please no more posts about Coury. He is TERRIBLE. He couldn’t start for Gardner-Webb and he’s starting for us. I can’t wait until Ramel graduates. Happy Belated Birthday BCG.”