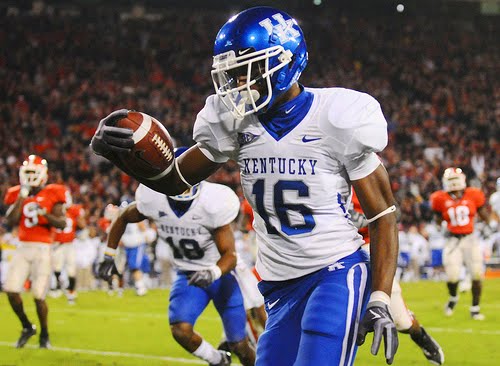 Watching Cobb and Locke perform these first two weeks of the season has been very enjoyable.  Those guys are special talents that Kentucky only gets every blue moon, and normally not in a pair like this season.  But, for those guys to succeed at their fullest, an opposing defense can not target them, but instead must respect the other offensive skill players.  In the past 2 seasons, this has been a problem.  Through 2 games this year, the secondary skill players have been impressive, and show the potential to make this a very high scoring offense.  Here is a quick look at these players:

CHRIS MATTHEWS (WR)
Stats: 5 receptions, 88 yards, 1 TD
Impressive: DEEP THREAT.  Matthews has finally arrived as the deep threat he was advertised coming into Lexington last year.  But even more than that, I have been impressed with Matthews ability to adjust to the ball and still hang on to it.  The catch the corner of the endzone against WKU also showed that Matthews has become that wide receiver who can go up and get the ball, something that Randall Cobb had been depended on to do, but really wasn’t his top quality.

LAROD KING (WR)
Stats: 6 receptions, 74 yards, 1 TD
Impressive: This guy is the future of the UK wide receiver position.  He has reliable hands, nice speed, and has become a key receiver in the middle of the field.  But as the first play of the season showed us, King can be an outside receiver too.  King will not get a ton of catches this season with Cobb and Matthews (and Locke too) getting the main load, but I am really excited about the future of this guy.

MATT ROARK (WR)
Stats: 6 receptions, 112 yards, 0 TD
Impressive: If I asked you who the 2nd leading receiver was on the team, I would bet you couldn’t come up with Roark immediately.  But there he is, 2nd in the team in receptions and yards.  He has proven to be a capable backup after a couple rough years in Lexington.  In a 4 WR set, I like Roark on the field, and I am predicting now that he will make a HUGE catch at some point this season.

DONALD RUSSELL (RB)
Stats: 10 carries, 55 yards, 0 TD
Impressive: Much like King, I like the future at the running back position with Russell.  Once Locke is gone after this year, it appears that Russell will be the guy.  And his 5.5 ypc average says that Kentucky will be OK.  He has shown ability to find the hole and has shown decent speed.  I honestly think his speed is undervalued because we compare it Locke’s.  But he is certainly a capable backup this season, and I like him getting 5-7 carries a game this season.

Combined, Matthews, King, and Roark, are averaging 8.5 catches for 137 yards a game.  When included with the production of Cobb and Locke, you can see why the offense has been successful so far.  All I know is that the future of UK football, especially on the offensive side of the ball, looks bright.  Roark, King, and Russell will all be back next season, likely as starters.  Add on to that Cobb should be back, with Newton/Mossakowski ready to step in at quarterback and you can see that next season COULD be another good year.  Here’s to hoping these guys continue their solid play in SEC games, and stay as healthy as possible.