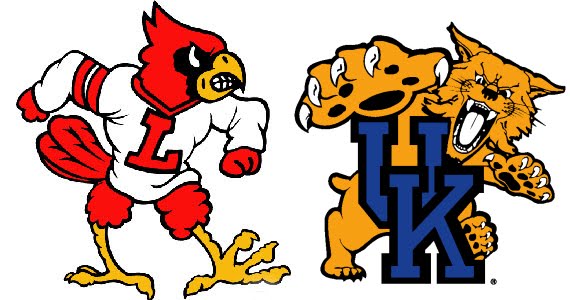 I don’t know about you all, but I love having Louisville on the football schedule every year.  For 2 reasons.  First, I think a big thing that makes college sports incredibly interesting is rivalries.  Yes, you might have a Yankees-Red Sox or Lakers-Celtics, but those rivalries don’t usually encompass entire states with the fury and passion of college rivalries.  The in-state rivalry that exists between UK and UL is fairly unique for SEC schools too.  Auburn-Alabama, Ole Miss-Mississippi St, and Tennessee-Vanderbilt all are within the conference.  Arkansas and LSU don’t have an in-state rival.  And Texas A&M ended it’s rivalry with Texas.  Georgia, South Carolina, Florida, and Kentucky are the only SEC schools that get the experience of taking on their in-state, non-conference rival every year.  I love it.

Secondly, it is the one and only shot, and has been this way since the mid-1990’s, that Kentucky has a chance to make a mark in the non-conference.  I wish they would add another BCS team to the schedule each year, but I understand the reasoning why you don’t.  The SEC schedule is tough enough, and you want the revenue from an additional home game.  But that is an argument for another day.  For now, we have Louisville.  Certainly they have had down years where even that game means very little.  But more often than not, UL has at least a decent team and gives UK an early season chance to make some noise.

But, it pains me to say, but the days with UL on the schedule may be numbered in the near future.  First, take a look at each of the SEC schools and their games with BCS non-conference opponents this year.

The only other BCS schools to play no other BCS non-conference opponents are Minnesota, Baylor, Kansas State, Texas Tech, Kansas, Duke, Oregon State, Arizona, and Colorado.

Now, why does this concern UK-UL?  Because of one man: Mike Slive.  OK, maybe 2 men: Slive and Nick Saban.  Reports are that Slive wants the 9-game schedule, but in a vote of SEC coaches, it came out 13-1 against, with Saban being the 1.  Well, if the college sports were a democracy, then this would be a non-issue.  SEC coaches clearly want to keep the schedule at 8-games, and it has already been confirmed the schedule will remain the same for 2014 and 2015.  But the problem is, the coaches don’t make those decisions.

At least for the next 3 years, Louisville is safe on the schedule.  After that, the odds get much more dicey.  At least for me, even if the conference moves to 9 games, I hope Louisville stays on it.  What is your take?  Keep the schedule more difficult with Louisville, or bounce them to soften it up should the league move to 9 games?

45 Comments for BTI Rants and Ramblings: I want UL on the football schedule, will they remain there?