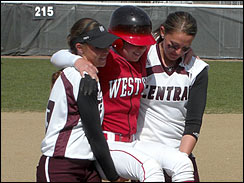 1. Story from Jody Demling of the Courier-Journal about Michael Avery.  On the surface, this seems ridiculous.  But, its only a verbal commitment, so I don’t think its that bad a move.  Now, people that say “he just committed to Kentucky, he must be great.  He’s 6-4 now, he’ll grow 4-6 more inches before he’s done.”  Thats just stupid.  Clearly, the kid has skills FOR AN 8th GRADER.  But, lets not annoint him the next Dan Issel.  I do hate this is where recruiting has gone though.  Lets say the kid blows out a knee his sophomore year, or just doesn’t improve much.  Then UK is forced to not accept his committment, and both sides come out bad.  I guess my one real question is: Are there not enough talented high school players in the country that an AAU team had to have an 8th grader on the squad?

2. You want Billy Gillispie’s pick(s) for the Derby?  Well, Coach G takes the easy way out, picking 1/4 of the total field, and gives “no particular order” for his horses. My picks (since I know you all care what I say) and THIS IN A PARTICULAR ORDER: 1st-Visionaire, 2nd-Pyro, 3rd-Gayego.  That would pay off pretty nicely, and it would be a good story to have Michael Matz (trainer of Barbaro) win another Derby.  Just to give you an idea of how bad my picks have been recently, here are my recent finishes:

If my horse finishes in the Top 10, I will be happy.

3. Speaking of the Derby, here are the stretch runs for every Derby between 1987-2006, and here is Street Sense’s victory last year.  Watching that first video made me very sentimental and made me think of my favorite Derby winners.  Here are my Top 3:

1) Lil E. Tee: the first derby I can remember watching, Pat Day gets the win, and loved the silks.  Someone will point out that Lil E. Tee had orange checkered silks, but deal with it, I loved this horse.

2) Smarty Jones: The greatest performance I ever saw was Smarty Jones at the 2004 Preakness, and the saddest I have ever been is after watching him get clipped at the Belmont that year.  Best horse I have ever seen.

3) Silver Charm: 1997 Derby winner was the first I ever picked correctly, will always remember him.

4. Matt told you about the story of Chris Lofton and his battle with cancer this past season.  Here is the link to the story by ESPN, who interviewed Lofton about the ordeal.  Certainly makes me feel bad for being critical of his play this year, and makes you wonder how much better UT would have been with a completely healthy Lofton.  Would they have beaten Louisville?  Who knows?  Also amazing about this story is how the cancer was discovered and how Tennessee kept it secret for this long.

5. Absolutely amazing story out of Oregon.  A girl hits her first ever home run, blows out her ACL while rounding first.  If her teammates or a trainer touch her, she is out.  So, what to do?  The other teams first baseman and shortstop pick up the girl and carry her around the bases.  And it turns out that home run was the game-winner.

6. Just because I am interested where people stand on this, whats your opinion on the Army football player getting drafted this past weekend, thus giving him an exemption out of his service.  Personally, I had no problem with this because this does give the Army some good publicity, but my opinion started to shift when the player, Caleb Campbell, said “I’ve heard stories about what goes on in Iraq and Afghanistan.  In a sense, there is just as much pressure in the NFL”  It’s truly one of the most ridiculous things ever said.  I would have actually respected the guy if he said “I am lucky, because my life would have been at risk, now its not”, but he chose the former.  Both sides have a legitimate fight in the argument, I was just interested where the masses (meaning UK fans) stand.