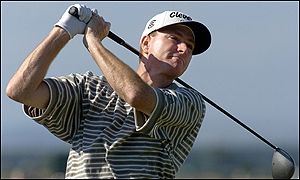 AS OF WHEN THIS WAS POSTED, FORMER UK GOLFER STEVER FLESCH WAS 2 UNDER PAR THROUGH 8 HOLES, PUTTING HIM IN A TIE FOR 5TH PLACE AT THE MASTERS.  J.B. HOLMES ALSO IN THE TOP 30.

As you will see later in this post, I love the Masters.  I am a golf nut and that is the mecca of American golf.  So today, I pose this question: If you could have been at any 3 sports moments in history, what would those be?  My personal feelings:

(1) Kentucky-Duke: 1992, I don’t care how it ended, it was the best college basketball game in history.

(3) Boise St.-Oklahoma: Fiesta Bowl 2007, probably the best football game I have seen on TV, imagine what it would have been like to attend that game.  Still to this day, the only football moment that made me jump out of my seat.

I also realized that I eeerrred in saying Keith Bogans was one of the 8-10 best players in UK history yesterday.  I said that basically off the top of my head without ANY research, and as Matt said in his philosophical voice, “Maybe you should do that”.  So, after looking at it closely and getting some criticism, I guess Bogans is properly ranked at #16.

On to the Links:

1. The new Class of 2009 rankings have been released on Scout.com and here are some notes:

(1) 32 players have already commited to a school.

2. Bill Self has turned down Oklahoma St., meaning that at least for a little while Billy Gillispie’s name might be thrown around.  Other reports have OK State looking at Vandy coach Kevin Stallings, meaning another SEC job may open up.  If this happens, it means that UK, South Carolina, LSU, Arkansas, Vandy, and Mississippi would have all had coaching changes in the last 3 years.

3. Kentucky baseball beigns a HUGE 3-game series this weekend against SEC leader, 14th ranked Georgia in Athens.  This is a big series, not only because Georgia is leading the SEC, but because it will only be the 4th, 5th, and 6th games against a ranked team this year, not to mention it is on the road.  Kentucky is 26-5 this year, but is only 1-2 against teams ranked in the Top 25.  For contrast, Georgia has played 17 of their 32 games against teams in the Top 25, with a 20-12 overall record.  If the Cats take 2 out of 3, it will be a HUGE accomplishment.

4. Courtesy of nerve.com is the 50 best comedy sketches of all-time, with viedo accompaning most of them.

5. A fairly funny video of a man’s reaction when he finds out his wife cheated on him with A-Rod and now is pregnant with the sluggers baby. Cut me some slack, its a slow Friday.

6. If I could do one thing sports-related in this world, it would be play in the Masters, or just play a round at Augusta.  Just to get your golf juices flowing here on the 2nd day at the Masters, here are 5 of the greater moments in the tournament’s history.