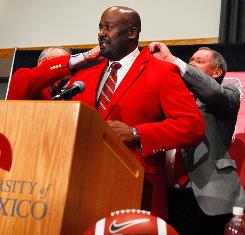 -In case you missed them yesterday, take a blast from the past with these quizzes:
UK Basketball All-Americans since 1947
UK opponents in the NCAA Tournament since 1992

-I’ve seen alot of bad talk about Rich Brooks around the comments section recently.  But, just think, we could be New Mexico Lobo fans and our 1st year coach could already have a sexual harassment suit against him, along with assaulting an assistant.

-Also not greatly reported was the little trick pulled by Mariners color analyst Mike Blowers recently.  He was able to predict a guy’s first career home run, on which at-bat, on what count, on what kind of pitch, and to what part of the field.  It’s really freaky audio.

–Awesome NASCAR crash from the weekend. (Yes, I get it, this is 3 days late.  GET OVER IT!)