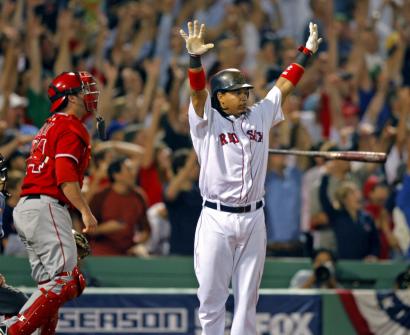 1. I have all of the sudden become a horse racing fan, mostly because I really want a Triple Crown winner, in part because its so important to this state, and in part because PETA pissed me off with their publicity stunt after the Derby.  I now want so badly for Big Brown to win the Triple Crown (article about the subject on cnnsi yesterday), just so we can all celebrate the sport that is as exciting and entertaining as any out there, and move on past the tragic accident two weeks ago at Churchill.  Thank god autopsy results are coming out vindicating the fact that weird things happen in horse racing.  What I don’t understand is how a person can be sooooo hurt by a horse that dies, but where were they when Mike Utley was parlyzed for life playing football.  Or the minor league baseball coach that was killed by a line drive last season?  Or the guy who had his throat slashed earlier this NHL season.  What about the numerous people killed in auto racing, skiing, and extreme sports.  Where are those people when awful things happen to humans?  And please dont give me this people have their own free will crap.  Do you think OJ Mayo was on his free will when deciding to turn pro?  Hell no.  Other people pushed him to do that.  My point is there is a risk in EVERY sport.  Does horse racing need improvements.  Absolutely?  But, its not in the way these horses are treated.  Things that do need to change:

(1) The Triple Crown races are spaced too close together.  Part of me wants to keep them the same because of the history of these races.  But, in the way horse racing is these days, the only thing that really gets a ton of national attention is a Triple Crown winner, and that is so difficult in today’s world.  Running at 3 different tracks at 3 different lengths (including a ridiculous length in the Belmont) in a span of 6 weeks is something no horse thats worth anything would do any other time in its career.

(2) Breeding needs to change.  You know how humans who are inbred have issues normally.  The same applies for horses, yet inbreeding goes on constantly.  It makes the horses more speed driven but not more durable.  It’s part of the reason why horses only run every few weeks, and maybe run no more than 10 times in a career.

(3) People need to be drawn to normal racing days at tracks.   Going to the track on a Tuesday in June is such a different experience than the first Saturday in May.  Horse racing has not done a good enough job publicizing their tracks.  Attendance sucks, and because of it you have two groups of people: Die Hard Fans and 3 races a year fans.  Thats not good for the sport.

2. Thanks to “When is Midnight Madness” for the link to this article in the LA Times about the pressure that Michael Avery is now under.

3. Interview in the Courier-Journal with UK running back Derrick Locke.

4. UK Baseball got off to a great start last night, beating Ole Miss 12-4, thanks in large part to Sawyer Carroll’s 6 RBI.  Carroll now has 73 RBI in just 54 games this season, all while hitting .416.  Cats need one more win to secure berth in SEC Tournament.

5. Manny being Manny, the best of.

6. Have I mentioned over the last couple days how much soccer sucks.  This time its not the flopping, its the fans.  Check out this video from England, when a TV goes out in some bar during a soccer game, forcing fans to find another place to watch.  Can we please get these English cops some rubber bullets and tear gas.

7.They get serious about their rec league softball games in North Carolina.