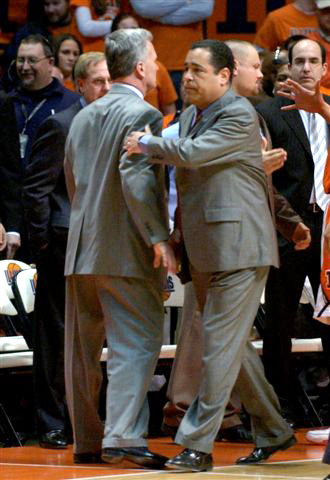 You know, the entire Eric Gordon backing out of Illinois and going to IU never set well with me, a largely indifferent bystander, so it is unimaginable how angry it made Bruce Weber. Apparently, he has chosen to make his feelings evident.

When asked the simple question about the upcoming Big 10 season, Weber said: “The league should be wide open and we can be right in the middle of it. I do know one thing, though. I think Indiana will suck. Don’t put that on the Internet.”

Oops. It looks as if Weber is still pretty pissed about the entire situation. I, for one, think it is awesome that he was both honest and kind of an a-hole. It’s especially awesome considering that he wasn’t even baited into saying that.

Oh, and IU will suck mightily, and it will be just retribution for how annoying it was to live in Bloomington those two months when they were actually good.