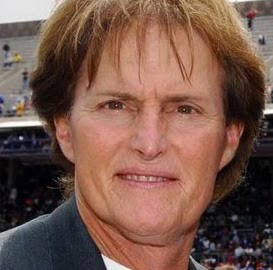 (Man, what a difference a life with Kardashians can make…careful Kanye)

I wouldn’t go as far as to say that I by any means “keep up” with the Kardashians. With that said, I dabble in the Kardashian’s business every now and then on a lazy Sunday afternoon when I can catch 2-3 hours of their mindless, mildly entertaining shows in a row. I watch enough to know that Kris grunts way too loud when she plays tennis, Kourtney is the strangest human being alive, Khloe and Lamar have a love like Johnny and June, baby Mason needs a haircut, and Bruce Jenner deserves an Olympic medal for half of the stuff he deals with since joining forces with that family.

Jenner is a former track and field olympic athlete. In fact, Jenner won the gold medal for the decathlon in the 1976 Olympic games. A little known fact is that Jenner was a football player first (he earned a scholarship to play for Graceland College in Iowa), but only switched to the decathlon after a knee injury disrupted his football playing days. Jenner competed in his first decathlon event in 1970. Two years later, he finished 10th in the Munich Olympic games. Four years later, he finally won the coveted gold medal and became an American hero for the feat. And then he got Kardashian’ed, with a side of plastic surgery. I can’t help but wonder as I watch the poor guy take hits on his confidence every episode from his fame-obsessed wife, if he ever thinks to himself…”what happened?” To Bruce’s credit, he comes off as a very supportive step father to all of the Kardashian children, who seem to love him very much. Today/tomorrow (depending on when you read this) is his birthday, by the way. Happy birthday, Bruce. Celebrate and give Kris a kiss and a pinch on the  botox from all of us here at KSR.

And now on to the news from the day…

– Two teams entered this afternoon’s football game looking for their first SEC win of the season. Both teams displayed a number of reasons why they had gone winless up until this point in the season, plagued by a number of turnovers on each side. The biggest difference in the game? On three Kentucky turnovers, Missouri capitalized by converting 21 points. On the three Missouri turnovers, Kentucky only managed to put 3 points on the board. The net rushing yards (Missouri-186, Kentucky-101) and the net passing yards (Missouri- 87, Kentucky- 78) were close enough to keep Kentucky in the game. Kentucky’s inability to capitalize on Missouri’s mistakes was the dagger.

– In a phrase far too familiar for Kentucky’s football team this season: when one thing was finally working, another thing was not. The defense played well for the most part today. The defense not only created turnovers, but they found a way to keep Missouri’s offense in check–especially in the first half. In the most “Kentucky football” thing ever, on the day when the defense created more turnovers than they had in weeks, the offense coughed up the ball more than they had in weeks. If it’s not one thing with Kentucky football, it’s another.

– Despite the 23-point final margin, midway through the third quarter, the game was still up for grabs. Kentucky’s defense had done enough to keep the Wildcats in the game, despite the turnovers. The score was knotted at 17-10 in favor of Missouri when the flood gates opened up. James Franklin entered the game coming off of a knee injury, and found a way to steady his team late in the game.

– Beyond the turnover statistics, which were very telling– 3rd down completions were another clear indicator of how the game turned in favor of the Tigers. Kentucky was a dismal 1-12 on third down conversions for the game. Missouri on the other hand, converted on 10 of 16 tries on third down. It’s hard to win a game with that statistic being so lopsided.

– A number of head-scratching coaching moves occurred in the loss today, the most talked about being the decision to use Patrick Towles in the third series of the game–despite the fact that Jalen Whitlow had been keeping the offense moving. The Cats had seemingly found a working rhythm early in the game on the shoulders of Whitlow. Although the coaches had made the decision before the game to play Patrick Towles as well, presumably in a pre-determined 3rd series entry into the game, the decision stalled the offense as Towles immediately went 3-and-out in the series. The decision to allow both quarterbacks to play doesn’t seem to be the issue. What seems to continue to plague the Kentucky coaching staff after games, especially in the eyes of fans, is the lack of in-game adjustments when something is/isn’t working. Jalen Whitlow was working. Kentucky had just scored, and absent a Jonathan George fumble on the opening possession–would have likely been 2-for-2 behind Whitlow to start the game. Even offensive coordinator Randy Sanders admitted in the post-game comments that it might not have been the correct decision. I will say that it’s nice to hear Sanders at least slightly pinning something on himself, after a string of post-game comments this season that, for lack of a better phrase–have at  times thrown the quarterbacks and players under the bus.

– At the end of the day, Missouri earned their first SEC win since joining the league. Kentucky? Kentucky sits with 8 losses and a win against Kent State. The question now becomes, can this team muster up enough motivation to pull out a winning record in the remaining games on the schedule? Vanderbilt, Samford and Tennessee have to all be considered potential “winnable” games, especially Samford at home. But has Kentucky given us enough reason based on their performances this season to feel confident in a result better than 1-2 in the final stretch?

– On to some brighter news… The Kentucky basketball world was rather quiet today. But, just in case Kentucky basketball needed any more positive publicity, Kirk Herbstreit pumped the Kentucky All-Access show on ABC tonight, calling it a “fascinating watch.” Somewhere Billy Donovan has both fingers in his ears, stomping and pouting.

– A huge congratulations to Matthew Mitchell and the Kentucky women’s basketball program. On a day that was mostly stained with the football loss, the UK Hoops had a historical moment. Mitchell and his staff landed the highest rated commitment in the program’s history. The UK Hoops received a commitment from the #5 player in the country, Linnae Harper. Harper was in attendance at Big Blue Madness last month and clearly enjoyed MItchell’s dance moves. Or so I assume. She chose the Cats over Ohio State, Tennessee, UCLA and Miami (Fla). Matthew Mitchell is getting the job done.

– Another big congratulations to former Kentucky Wildcats DeAndre Liggins (OKC Thunder) and Josh Harrellson (Miami Heat) who both won roster spots this evening with their respective teams. The news is great for both young men, who flourished in their time at Kentucky and found themselves competing with the best in the world in the NBA. The great news is a testament to them, as well as Calipari, who helped revive both of their careers in a lot of ways after Billy Gillispie’s departure. Liggins and Harrellson become two of the most beloved Wildcats during the Final Four run two years ago. Absolutely great news for both guys.

– Speaking of random interesting news involving the Oklahoma City Thunder…news just broke that the Thunder have traded James Harden to the Rockets. Mull over the implications of that decision for a moment.

– WKU is bowl eligible. Good for them. Sigh for us.

– And last but not least, LeBron James had some more encouraging words for Anthony Davis following his performance last night in the pre-season game against the heat. James was quoted as saying, “New Orleans got a good one.” Couldn’t agree more.