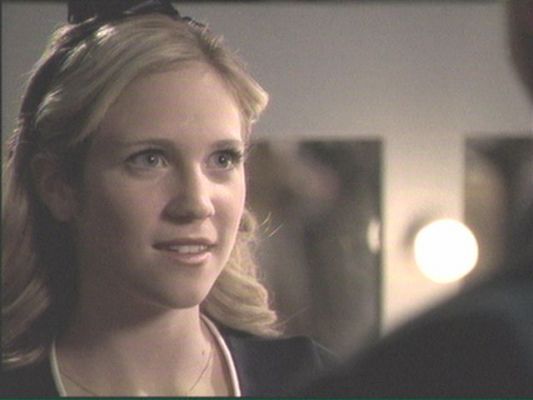 Have you ever become really enthralled with a TV series, only to wonder to yourself, “Does anyone else even know this series exists?” That’s exactly how I felt about the show American Dreams. The NBC show debuted a little over 10 years ago and only stuck around for 3 seasons (I think that fairly well answers my question from above about who else was watching it). To this day, I can’t figure out why this show didn’t make it. The show centered around a Philadelphia family (the Pryors) living in the early 1960s. Music was a central theme throughout the show, and one of the main characters (played by Brittany Snow, pictured above) was a regular on the popular show American Bandstand. The show cleverly used modern musicians to play the part (and the covers of the music) of the 1960s bands who were featured on the show. For example: Usher played Marvin Gaye, Third Eye Blind played the Kinks, Jason Mraz played Dion DiMucci, John Legend played Stevie Wonder and Alicia Keys played Fontella Bass. The episode when the Beatles arrived was a must-see.

Beyond the music, the show did a great job of exploring and hitting on many of the social and cultural issues of the time. One of the show’s main characters, JJ, was set to attend Lehigh on a football scholarship. When he injured his knee, he instead enlisted in the military–sending him to the Vietnam War. The Philadelphia riots were depicted, as well as some of the racial tensions of the time. Although the timeline was not always 100% historically accurate, for me the show gave an interesting and entertaining glimpse into life in the 1960s while giving huge credit to the influence and popularity of the music of the times. To this day, I’m still not sure why more people never caught on to one of the best shows that no one knows about (in my opinion).

Brittany Snow celebrates her birthday today. Next to American Dreams, her other best work includes my favorite movie of the year (No, she was not in Lincoln or Silver Linings Playbook), Pitch Perfect. If you haven’t seen it yet, don’t worry…you are only about 29 viewings behind me.

Florida opens up as a 6-point favorite over Kentucky for tomorrow’s noon tip in Rupp Arena. Six points seems a bit low to me, but perhaps Vegas is factoring in Kentucky’s desperation for a win, the potential for a Missouri-like Rupp Arena atmosphere, Florida’s struggles on the road and John Short’s prediction.

Kentucky will be facing an even more difficult task with only an approximate 36-hour turnaround between the Georgia loss on the road Thursday night and tomorrow’s early tip-off with Florida. The Cats haven’t had much time to lick the wounds after the disheartening loss, but perhaps that only adds to the desperation Calipari seems to be trying to fuel the fire with at the moment. Calipari spoke in metaphorical terms (Thank you, Jerry Tipton and your parenthesis) about the situation Kentucky faces tomorrow, essentially calling it a “do or die” moment. “This is a one-game season. And it will be every game we play from here on out. It’s a one-game season. We’ll talk about it today. That’s what it is: a one-game season. Now are you going to fight like heck, play through the ups and downs of a game, or are you gonna die? I can’t put it any more plainly or bluntly.”

In perhaps his most interesting comment of the pre-game press conference, Calipari talked in terms of the future; not just for the Kentucky program, but for the players as well. “We need to keep an eye on this program, the far-reaching parts of it, not just tomorrow’s game. Where is this going? Who can be a part of it? Who can’t?”

It doesn’t take much detective work to guess what John Calipari might be referring to with these statements. At the end of this season, almost every player (especially the members of the freshmen class and Ryan Harrow) are going to be faced with options. Those players will be making decisions about whether or not to enter the NBA draft or stay in college. Many of those decisions, if not all, will be made for personal reasons. Calipari might be using tomorrow’s game, and whatever remains of the season, to make personal decisions about the program and who can be a part of it moving forward– regardless of the personal decisions being made by the players.

When it comes right down to it, strategy and game planning aside, Calipari just wants to see his team fight and play. Just play. “When this kind of game comes, this is what playing at Kentucky is about. You’re at home. You’re going to have 25,000 crazy fans with you. Go ball. You’re not holding anything back.”

Speaking of the fans, John Calipari has a request for tomorrow’s game. Cal has asked that all of Big Blue Nation in Rupp Arena (and at home, or at least I like to think he wants us to join in as well) stand up with 8 minutes left in the 2nd half AND remain standing and cheering until the final buzzer sounds. In his words, we need to “help drag this team across the finish line.” I’m not sure I’ve ever heard Cal speak in such terms of “finality” before when referring to his team. There always seems to be a bigger picture in mind. Desperate times call for desperate measures though and I think even Calipari understands that (metaphorically) tomorrow’s game is Kentucky’s final chance for survival. Tomorrow is the finish line. Kentucky has to make it across, or they don’t make it at all.

After the up and down roller coaster of this Kentucky basketball season, the endless “bubble talk” discussions, the “what went wrong?” questions, etc., I’m just hoping for an enjoyable basketball game tomorrow. Maybe Kentucky wins. Maybe Kentucky loses. Maybe we make the tournament. Maybe we don’t. I can count the number of games that I have truly enjoyed watching from start to finish this season on one hand. I’d like to add one more finger (it’ll be my middle one if we lose, but hey…) to that list tomorrow. That is all.

A few of Kentucky’s players spoke with the media today…

“I’m probably disappointed in myself, because I do feel like I could give more effort out there.”

“I feel like this season I kind of let some things go by. I haven’t given it my all sometimes.”

“It’s do or die for us. The guys that haven’t bought in, they’re going to have to hate me after tomorrow. They can hate me…but I’m leaving it all out there.”

“(The younger players) can hate me for the rest of their lives, but I’m going hard at them if necessary tomorrow.”

“I thought I was stepping into a powerhouse (at UK). So I was thinking the role might be a little easier…”

Julius Mays has been quiet in Kentucky’s past few games. With tomorrow being his senior night, and for a guy who has spoken with nothing but pride for the uniform he has worn all season long, I expect a big game from Mays. If you are looking for the one player Kentucky might need a good game from the most though, look no further than Ryan Harrow. (H/t Jon Hale)

Don’t forget that as part of tomorrow’s game, Kentucky will be honoring both Twany Beckham and Julius Mays in the “Senior Day” festivities. Jarrod Polson, Jon Hood and Marquis Estill are all also slated to graduate in May, but will not be taking part in the ceremony tomorrow. You may not be able to join Twany Beckham in his routine Oreo McFlurry Nightcaps, but you can join him tomorrow for his “career cap.”

Also, Erupption Zone… can we get a “one more year” chant going for Jarrod Polson tomorrow? Just in case. Can’t be too careful. Seriously though…

Let’s just take one night off from talking about the bubble, deal?

If Dominique Hawkins hasn’t become a household name yet in the Commonwealth, it might very, very soon. You know something special is brewing in Rupp Arena when John Calipari and Orlando Antigua show up to sit court side, AGAIN, for a Sweet 16 game. Dominique Hawkins has clearly caught the attention of the Kentucky coaching staff this week. Hawkins’ team (Madison Central) just keeps winning, and Calipari and his staff just keep showing up to watch. Hawkins put on a show today in front of the staff, pouring in 31 points to go with 12 rebounds.

Hawkins attended a UK practice after his team’s first round win the other day, and judging by what he told the Herald Leader, the warm feelings between the staff and Hawkins are mutual. “It was like going to a concert and meeting somebody famous and passing out. I can’t believe I went there.”

Hawkins mentioned that Calipari had a message for him as well: “Keep working hard and we’ll keep coming to your games as long as you’re winning.” Hawkins says that “it gives me a sense that they’re looking at me pretty hard now.”

After attending a UK practice, Hawkins didn’t seem intimidated by the level of play. “I was looking at the point guards…and I was like ‘I can do all that stuff they’re doing.'”

Like other Kentucky Sweet 16 heroes of the past, Hawkins’ play is picking up attention from other schools as well. According to sources, South Carolina’s Frank Martin has offered Hawkins a scholarship after this week’s performance. I hope Hawkins is into Sandstorm and having his coach hate him with his eyes.

If there is a void in your heart for good defense after watching the UK men’s game on Thursday night, it’s not too late to jump on the UK Women’s Basketball team’s bandwagon. The Wildcats defeated Vanderbilt tonight with relative ease tonight to advance to the SEC Tournament Semi-Finals. If you missed the recap, Wilder Treadway and Hayley Minogue have all the details straight from Duluth, Georgia. Duluth is better than Gary, Indiana. That is all I can tell you.

And last but not least, Adidas unveiled the new John Wall shoe, aptly named the “Crazyquick.” Love it? Hate it? More concerned about tomorrow’s game? Yeah, me too.