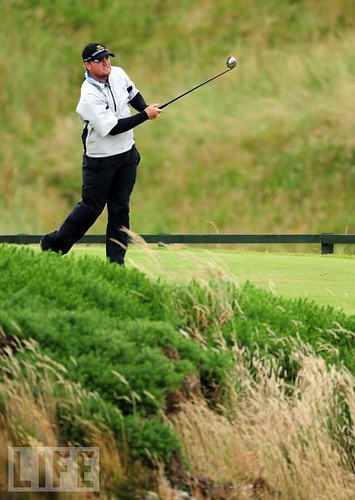 Well, our boy J.B. Holmes didn’t fare as well as hoped at the British Open. John Bradley started the day in a tie for 12th at -4 but, despite keeping his score at 4 under, dropped to a tie for 18th early as other players caught up to and passed him. Around the turn, Holmes righted the ship with a birdie and jumped to one under for the day and a tie for ninth. Later on, another birdie vaulted J.B. as high as a tie for seventh through 13. The final few holes were unkind and J.B. recorded two bogies to finish even on the day and four under for the tournament. Still, a top 25 finish for the KY native and UK graduate isn’t shabby. Congrats to the Shrek kid that is going to win this thing (Big year for South Africa, huh? First the World Cup and now this) and a shout out to J.B.’s effort.

Also, if you missed the broadcast this morning, ESPN played a recap of last year’s unbelievable run by a 60 year old Tom Watson. It is a great spot and worth a watch. Watson was in the booth with Paul Azinger and Mike Tirico watching the video debut this morning. Afterward, when Azinger started to comment on it, he broke down and couldn’t speak. Great moment. If you aren’t a Watson fan, this video might change your mind.