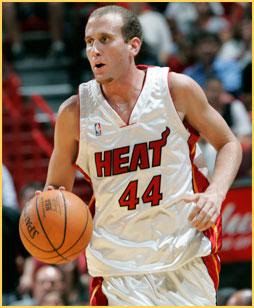 Let me set the scene for you. It is February 4, 2003 and the country’s collective sports attention is focused on Lexington as the newly minted #1 team in the country the Florida Gators were coming to town to play our beloved Wildcats. Florida entered the game with a team as stacked as they’d had in the post-Erin Andrews era and their egos were as big as Matt Walsh’s fro. ESPN was in town and Dickie-V was his sweaty, pre-vocal chord surgery, raving lunatic best.

The sellout crowd was buzzing an hour and a half before tip off including the ERupption Zone which at the time was actually relevant. I knew there was something in the air when the Sourpuss I sit next to in Section 230 who has a wider stance than Senator Larry Craig at the Minneapolis Airport didn’t even complain about “Right Thurr” being blasted over the PA incessantly during warm ups. Yep, we were on the verge of a special evening and it didn’t even involve boxed wine, candles and The Goonies.

Looking back, there couldn’t have been a team worthier of a beat down than Florida. If ever there was a displaced Duke team, it was the ’03 Gators. Just look at their starting lineup:

First there was Matt Walsh, the most hated player of the post-Christian Laettner, pre-Joakim Noah period. Walsh was the typical all hype no substance Dukie/Gator. And then there was the hair. I could go on for weeks about the hair, but looking at the picture we now know the fro and headband were more than just a fashion statement (hello male pattern baldness).

Then you have Matt Bonner, the first guy you would choose to guard in a Y pickup game. He might as well have been named Kyle Singler… who am I kidding, Bonner was a poor man’s Brian Scalabrine (only pastier).

Brett Nelson was the “hustler” of the group that play-by-play guys always loved. He had all the “heart”, “leadership” and “intangibles” but was sorely lacking “defensive skills” and “athletic ability.” In other words he was Wojo, minus the propensity to inexplicably slap the floor more times than Whiplash the Cowboy Monkey.

Just like every Duke team out there, the 03 Gators had to have their token athlete, and that was Justin Hamilton. Hamilton was just glad Donovan hadn’t figured out that Anthony Roberson could play circles around him.

Finally there was David Lee who honestly was tough to hate. Although, I didn’t care much for his work on the Greatest Hits album.

Meanwhile the UK starting line-up had some of the most likable players and personalities in recent memory with Keith Bogans, Gerald “Don’t Make Me Cut a” Fitch, Marquis Estill, Erik “ED” Daniels (Whose nickname has been ruined by commercials featuring outdoor bath tubs and annoying Elvis parodies.) and the inimitable Chuck Hayes (particularly his free-throw form). Not to mention the first man off of the bench Jules “Bony Anderson Silva” Camara

Kentucky came out swinging and from ED’s layup off the opening tip, it was clear that the cats were the aggressor and the Gators were the pitiful clump of flesh cowering in the corner. It didn’t take long for Donovan to get the look on his face like he had just pounded a dozen chili cheese burritos and a case of Natty lite and was beginning to feel the after effects. During run at the end of the first half that put the Cats up by 21 Section 230 (and the rest of Rupp) was a riot zone and when Bogans’ oop to Hayes made it 43-20, Sourpuss even turned gave me a high five.

Honestly, it didn’t matter if the Firecrackers jump rope team , Russian contortionists or the Zooperstars were performing at halftime because there were enough first half highlights for the whole game. However, the goodness didn’t stop there and in the second half Kentucky worked the back door more times than Rick Pitino sneaking into Karen Sypher’s house. Then there were the two straight steals where Florida looked like they were rushing up the court for no other reason than to present Kentucky the ball so they could in turn throw down thunderous dunks. The second of which, an Antoine Barber reverse jam that put the Cats up by 29, was particularly entertaining because it led to the patented nervous Donovan tie adjustment. Has anyone notices that when Billy D gets nervous he looks like he is trying get his tie just right?

Nervous Billy, is Christine stressing you out?

And just when I didn’t think the game could get any better, Bernard Cote checked into the game. While his stat-line had a 2 (for minutes played) followed by more zeros in it than our national debit, nobody has a name more fun to say than Cote. Best of all, after the win there was no chest bumping or smack talking from the team and the fans didn’t rush the court. It was the superior team exerting their superiority on an inferior opponent UK-style and it was more memorable than a chimpanzee riding on a Segway

Mosley’s Take: Brian, this was good–Matthew Broderick in “Inspector Gadget” good (that’s a compliment, btw). You did many things well including the buildup of suspense in your opening paragraphs, your very orginal comparison of that Florida team to various Duke players, and a ongoing sequence of good line and comedy. I could probably pick something out for constructive criticism, but “Megan Wants a Millionaire” is coming on soon, so I’ll just leave this as it is. Best of luck.