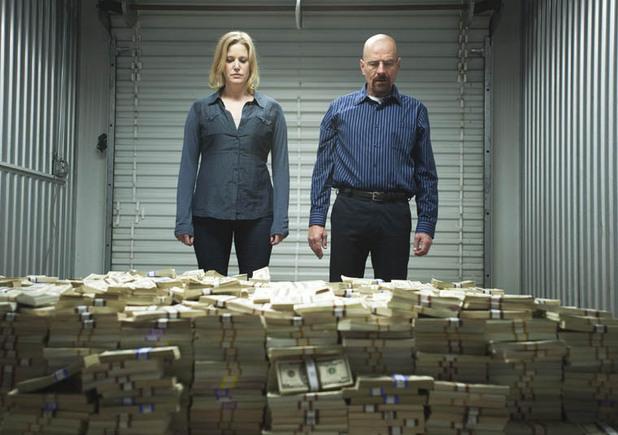 AMC announced on Wednesday that the greatest television show not named The Sopranos will return for its final run on Sunday, August 11. The final eight episodes of the two-part fifth and final season will air on Sunday nights this fall before the series finale on September 13, also known as a day I’m not looking forward to. Like everyone else who’s seen the show, I can’t imagine ever having to say goodbye to Walter White and Jesse Pinkman for good. I wish the show could last forever, but questions need to be answered and a certain DEA agent can’t remain in the dark much longer.

How will it all play out? Only time will tell, but the most suspenseful show on television promises to pull us to the edge of our seats and back before going off the air. The show’s star, Bryan Cranston, said it’s full of twists and turns, a lot of cliffhangers, and we won’t want to miss these final episodes. “It’s a roller coaster ride to hell,” he called it.

You can play catch up on Netflix — the first four seasons are available — or do whatever it takes to get your hands on the DVDs. I don’t care how you do it, just do it. You won’t regret it.

Kentucky basketball bid adieu to one of its favorite staffers on Wednesday when it was announced that Rod Strickland is leaving Lexington for his alma mater. Strickland accepted an assistant coaching job under Oliver Purnell at DePaul, where he was a two-time All-American point guard in the late 80s. Strickland had been a special assistant to John Calipari at UK after one year as an actual assistant coach. It was this time last year when it was rumored that Strickland would leave to work under Larry Brown at SMU, but he decided to stick around Lexington for a fourth season instead. Now, he’s moving on and we wish him the best in his new role at DePaul.

Let me guess, you want to talk about Andrew Wiggins. Well, let’s talk about Andrew Wiggins. The best high school basketball player since [Insert The Best Basketball Player Ever] is still scheduled to meet with Roy Williams, Bill Self and Leonard Hamilton next week, nothing changed on Wednesday. You can read into that however you’d like, but I still see it is as a positive for Kentucky. Calipari has done all he needs to do — the visit on March 28 was to answer any final questions — and everyone else appears to be scrambling to make one final impression. Does that mean he’ll pick Kentucky? Of course not. But I’ve heard the staff likes their current position and the visits from the competing schools next week, while UK stays back, appear to be a last ditch effort. Expect a decision to come not long after Wiggins talks to Leonard Hamilton and Florida State on Wednesday. Come on down?

Joe Lunardi released his first Bracketology for the 2014 NCAA Tournament. Kentucky is a one-seed, Lunardi needs a hobby.

With Marcus Smart’s surprise announcement to return to Oklahoma State, NBA draft gurus spent a lot of time Wednesday updating their big boards and mock drafts. That meant some movement for one Archie Goodwin. Just one day after falling out of Chad Ford’s Top 30, Archie moved back up two spots to No. 29 on the ESPN big board. Over at DraftExpress.com, he’s the 18th-rate prospect and projected to 17th overall. Archie’s worst position is on NBADraft.net, where the website has him going in the second round, 37th overall, to the Washington Wizards.

While Archie’s spot varies depending on who you ask, Nerlens Noel is sitting comfortably in the top two with Ben McLemore. ESPN.com and DraftExpress.com believe Nerlens Noel will go first overall to the Charlotte Bobcats with NBADraft.net predicting he’ll slip to the Orlando Magic at No. 2. If he does end up at Charlotte, he’ll team up with Michael Kidd-Gilchrist, and depending on how long it takes him to get out on the court, Charlotte could end up with the No. 1 overall pick again in 2014. Because they’re still not going to be very good. Could we see a Wiggins-MKG-Nerlens trio in Charlotte in the 2014-15 season??? I’m reserving my season tickets now, just in case.

So what went into Nerlens Noel’s decision to turn pro? He told Matt on Wednesday’s radio show, “It was a really tough decision leaving Big Blue Nation. I talked it over with my family and we felt the injury wasn’t that significant to the decision. I’m well ahead of schedule with my physical therapy so I felt I made the best decision for me and my future.” Noel added that he’s recovering well, feeling better everyday, they’re really pushing him hard in physical therapy, and he’s developed a mindset that he’ll come back stronger.

You can listen to Noel’s entire interview with KSR here.

Noel also made an appearance on The Dan Patrick Show prior to taking the KSR radio stage. He told Patrick a lot of the same things he said on KSR, but spoke a little bit about the Boston Celtics and his favorite player, Kevin Garnett. Noel said he can’t wait to face Kevin Garnett in the NBA and he joked with DP about a hypothetical scenario of playing in Boston as a member of the Knicks. “There would be a lot of animosity,” he said.

Wednesday was Nerlens Noel’s radio tour; Thursday kicks off the Nerlens Noel autograph tour across Kentucky. Here are the dates and times for the next four days:

Thursday will also be another big day for Kentucky Sports Radio radio when Huntington Prep head coach Rob Fulford joins the crew to, hopefully, give a little insight into the Andrew Wiggins recruitment. Fulford is the fourth guest this week for KSR, which has to be a record. Tune in at 10:00 a.m.