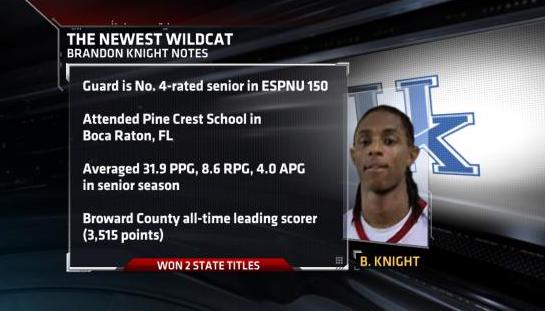 If you were going to create a prototype college basketball player to actually make the term “student-athlete” have meaning, you might create Brandon Knight. Brandon comes to UK as a top 5 player, but also a great student, a trait that unfortunately often gets forgotten by the media. He had a 4.3 GPA in high school, comes into college with a number of AP credits and was described by a high school teacher as one of the most knowledgable high school students on the topic of Shakespeare of any to attend her school. In short, he is the kind of student that if he went to Duke, would be praised on high by ESPN and all of the other outlets.

Knight was on the radio with me yesterday and said, “I plan on being a great student. I dont plan on getting any Bs while I am here.” That is the type of quote that any UK fan would love to hear from the player that is likely to be the best talent on the court on any given game. Knight has the potential to be special as a player, but he is also a special person and a student of the game, both on the court and in the classroom. I hope people embrace that aspect about him and as Jay Bilas once famously said, “recognize that there are great kids and students at schools other than Duke as well.”