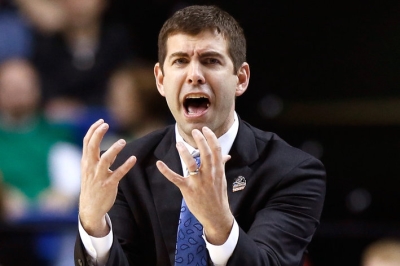 Rajon Rondo is no stranger to trade rumors, but after the Celtics basically gutted the core of their franchise by dealing Paul Pierce, Kevin Garnett, and Jason Terry to the Brooklyn Nets it was almost a foregone conclusion that Rondo would be dealt at some point in the future. However, if Brad Stevens has anything to say about it Rajon will be running the point for his first Celtics team. Stevens drove from Indy to Louisville on Thursday and stopped by Rondo’s basketball camp to speak with the lone remaining member of Boston’s 2008 NBA Championship team in person and came away very impressed with the teams PG, who is heading into his 8th NBA season.

“I just went down there because I wanted to get a chance to sit down with him,” said Stevens, noting he had returned home to Indianapolis and made the two-hour ride down to Louisville. “We spent quite a bit of time just alone together talking, just learning more about him. I just enjoyed spending time with him and asking him questions, not only about his time with the Celtics but time before. I found him to be really, really intelligent, really, really insightful. I thought he had great ideas. I’m really looking forward to working with him.”

In the end I still think Danny Ainge trades Rondo at some point during this season, as the NBA Draft this year is stacked full of potential franchise players that the Celtics would like to get their hands on. It is nice to see that at this point Stevens is a fan of Rondo though, considering the alleged issues that had occurred between him and Doc Rivers during his time in Boston.