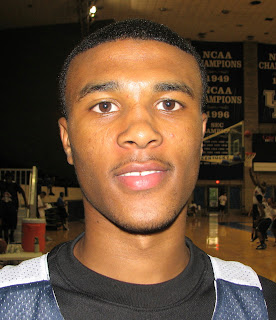 2009? #1 class. 2010? #1 class. 2011? Probably best class EVER dude!! Are you getting bored yet? It’s starting to get a little too easy. Like when I turn off the budget limitations and turn on the forced trades option on MLB 2010 The Show (Brandon Phillips hits a lot better with guys like Joe Mauer, Matt Kemp and Hanley Ramirez around him btw).

How about we skip forward to the 2013 class? That class has one of the top prospects to come out of Kentucky in quite some time in the form of Shelby County’s Darryl Hicks and UK’s staff is paying attention. They’ve been keeping tabs on Hicks for quite some time and it’s likely that in the next couple of weeks Hicks will be traveling to Lexington to play a little pick up with some of the guys currently on the team.

If you haven’t seen Hicks play yet, this weekend is probably your best opportunity, especially if you’re in Lexington. Hicks will most likely be there with his normal AAU team, The Ville. Here’s the schedule for those interested, and the link to all the information on the KY State AAU tournament.

Hicks is a nice player to watch and one that I particularly enjoy because he doesn’t exactly “wow” you with any facet of his game but he will impress you with his offensive efficiency, mid-range and long-range shooting ability and all out effort. Before you go here’s a couple more links to get you up to speed on Hicks’ game and his current recruiting situation.