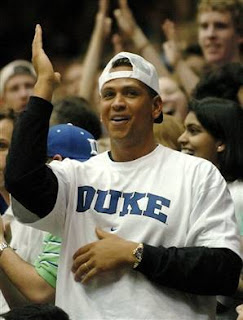 In this round, the “Who Wants to be a Blogger” contestants were each given one of UK’s rivals to make fun of/dissect. Each got a different team and over Monday and Tuesday, you will read each of them. Each judge will pick one favorite to move onto the next round and your comments will be considered by all of them.
Deep breath for Duke bashing in 3…2…1

Trying to craft a hateful or mocking article about Duke reminds me of the scene from Wet Hot American Summer when the team decides they have better things to do than play the annual baseball game against the superior camp.

Counselor:
As everybody knows, today is the big culminating, climactic softball game against evil Camp Tiger Claw. We have put together an unlikely team of misfits, and we’ve been training like crazy all summer. Yeah, it’s a motley crew that you’d think would never be able to win a single game. We had a cooky training period where it seemed like, well, it seemed like nothing was gonna go right, but, guys, somehow we made it to the finals. So I say, when those anonymously evil campers from Tiger Claw get here, we give it our best shot, and we try to come from behind at the last minute with some weird trick play that we made up, and we win the game! Whadd’ya say team!?

Counselor:
Is that how everybody feels?

Trite is right. Duke has been the target of ridicule since the Sumerians invented beer and Al Gore invented the Internet. Forget the Blue Devils, everyone.

How about some teams that aren’t getting quite enough disrespect:

USC: Tim Floyd runs as corrupt a program as there is in the country. Pete Carroll as a mentor must be nice.

Gonzaga: Are you a mid-major or a power program? Either make a Final Four or shut up. And the Adam Morrison to Larry Bird comparisons. That panned out well in the pros.

St. John’s: Please, waste a little more recruiting opportunity being in New York City. Everyone else is having a great time poaching your players for the last 20 years.

Kansas State: Yea, I’m sure Michael Beasley just really wanted to live in Manhattan, Kansas for a year. Nothing fishy at all here.

Florida State: Seemed like every kid Tubby recruited was considering FSU. At Free Shoes University, I wouldn’t be surprised if Bobby B’s program wasn’t the only one engaged in some misbehavior.

SEC West: I literally have zero confidence when filling in any of these names in a tournament bracket. Bring back Nolan.

New Mexico/Oklahoma State: If The Pit and Gallagher-Iba Arena are so daunting, why are your programs irrelevant?

UConn: Geno and Calhoun may hate each other. But we all hate you both. Guard your laptops, Connecticut freshmen. And Billy G, I hear Diana Taurasi has an open spot in her court-mandated DUI class.

Nike Uniform Designers: We’re going to look back on the muscle shirt/gaucho pants style like we do with the outfits from Saved By The Bell. Who is in charge of this sartorial disaster? I still can’t believe Cal didn’t demand new Unis, if anything just to wash the Billy G mojo off of the entire program. At least he got rid of most of the short guys whose pants touched their socks.

Notre Dame football: Nah, that one’s like Duke. A little too easy.