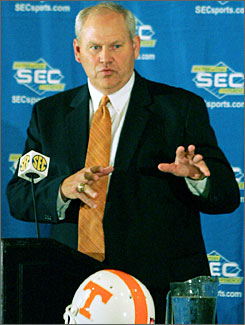 It’s all about bein’ discreet, ya see.

Of the many anomalies that were brought to the forefront Saturday evening is the alarming rate of injuries that occurred. For a team that has been virtually injury-free for the first two weeks, UK suffered quite a few to a couple prominent players. That may be only the tip of the iceberg, however, as there are accusations flying around the sanctity of MTSU’s stellar game plan.

Stolen Signs: Last season against Tennessee, Coach Brooks thought that something was amiss. During the game in Lexington, the coaching staff used towels to cover up hand signals sent in from the sidelines because they suspected some wandering eyes on the UT sidelines (or press box). Perhaps there was a man eating cupcakes behind the UK bench, and Fulmer couldn’t remove his eyes from that site. Either way, Brooksie suggests that MTSU may have also been privy to some signaling, and he thinks Fat Phil is the culprit. “They (MTSU) were getting them from the field or the press box. They might have gotten some help from Tennessee. Tennessee had them last year.” Not one to mince words, Brooks is flatly accusing both teams of stealing signs. Yikes. This is Tennessee we’re talking about here. And they love their NASCAR. Thus, it wouldn’t surprise me if these folks live by the adage, “if you ain’t cheatin’, you ain’t tryin.'”

Hackin’ Ankles: Seriously, when one of your most explosive offensive weapons and two defensive stars leave the game with the exact same injury, something is askew. I don’t know what else to say; I think they were diving at ankles. Jeremy Jarmon said they were doing a lot of cut-blocking, as well. While theoretically within the rules, it looks dirty when so many guys end up injured.

You decide. All I can think is, if a team comes in and possibly steals signs and injures some of our best players, don’t schedule them again. Plus, they almost beat us. That would’ve sucked.

Addendum: If this topic has been hotly debated over the last several days, sorry. I’ve been without Internet.