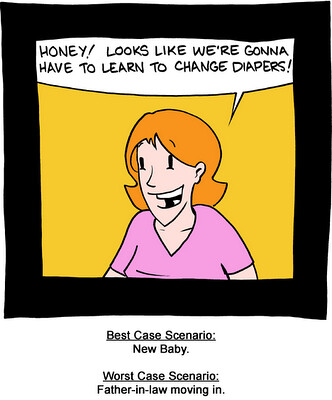 Don’t laugh. It could happen to you.

Since we are entering the final week of SEC Conference play and the loss yesterday makes the rest of the season a little more unsettled than we would like, let’s play a little best case/worst case with the Wildcats.

That is essentially what we all want/expect to happen, right? No big deal. Moving on to the Worst Case.

Worst Case:
1) Wildcats lose to Georgia.
2) Wildcats lose to Florida.
3) Vandy beats Florida and South Carolina and wins the SEC regular season title.
4) Kentucky loses in the second round of the SEC tournament (after a first round bye).
5) Kentucky drops to a #2 or #3 seed in the NCAA tournament.

Wow. That WCS is not good, but really, what are the chances of the worst case scenario happening? 5%? It depends on the Cats losing out, Vandy winning out, then UK pulling a Texas-like losing streak at the worst possible time. Here is what I see as the most likely scenario (other than the best case, which has a pretty darn good chance of happening as well):

Probable Case:
1) Wildcats play an inspired Georgia team but pulls one out on the road by 5 points.
2) UK returns home and pitches Florida an absolute monster game on Senior/Honor Patrick Patterson Night. Cats win huge.
3) UK wins the SEC regular season title.
4) After a bye, UK wins a close second round game of the SEC tournament against South Carolina.
5) UK gets the revenge game rubber match against Tennessee in the third round of the SEC tourney.
6) UK goes for the sweep of Vandy in the championship game of the SEC and NCAA tourny officials grant the #1 seed regardless of outcome.

What is your probable scenario for the Cats? Feel free to discuss in the comments.