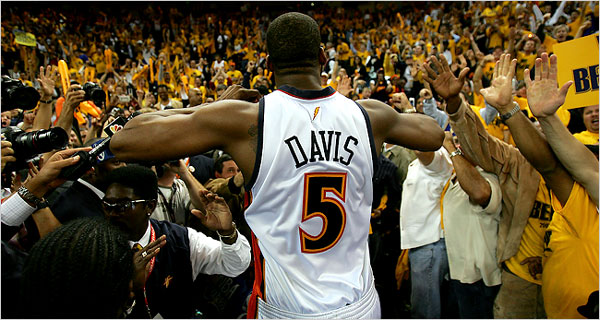 We don’t often show love for UCLA Bruins, but this week’s Tuesday edition of the News and Views goes out to Baron Davis and the NBA career he’s soon to leave behind. Davis suffered a horrific knee injury in the third quarter of New York’s game 4 win over Miami that will most likely bring his 835-game career to a tragic end. On Monday, the Knicks announced it’s a partial tear of the patella tendon and complete tears of the MCL and ACL. That’s about as gruesome as a knee injury can be, with expected recovery and rehabilitation time of at least one year. The 34-year-old NBA veteran is expected to hang up his jersey and move on to life after basketball.

It’s a sad ending to the career that produced an afternoon’s worth of highlight videos on YouTube. Davis was one of the most athletic point guards to ever play the game, and there are numerous NBA big men who have been on the receiving end of one of his dunks who will back that up. I’ll never forget the 2007 NBA playoffs when Davis’ 25 points per game led the Warriors to an opening round upset over the top-seeded Mavs. It was the NBA’s first and only Cinderella story and nearly every basketball fan in the country jumped on the Golden State bandwagon that postseason. Davis played with so much heart and showed so much leadership in those games, as his team became the only 8-seed to win a 7-game playoff series. The Jazz would end up knocking the exhausted Warriors club out in the next round, but not before Andrei Kirilenko got his face on a Baron Davis poster…

That dunk pretty much sums up Baron Davis’ entire career. He was so fun to watch when he was in his prime, and it’s a shame to see him leave the game on a career-ending injury.

Thanks for giving us a fun career to follow.

I was going to focus most of my ramblings in tonight’s night post on that handful of embarrassing UK fans on Twitter, but I see Matt did a solid job of doing that in the post directly below this one. (I wasn’t planning on being so nice.) I’ll never understand how anyone can think it’s okay to talk trash to an 18-year-old kid on Twitter, simply because he chose to go to another school. I don’t mind if it’s in good sports fun — like joking about Shabazz playing at 3am on FSN or so-and-so giving up on the NBA by committing to Louisville — but wishing a kid tears his ACL is not only offensive, it’s disgusting. Not only that, these people are tagging the players in the tweets so they can actually read them. I noticed Alex Poythress responded to one of the idiots, telling him to respect Bennett and “stop saying that stuff.” Good for Alex. And shame on that guy who continued to do it after one of Kentucky’s own players asked him to stop. I just don’t get it. What an embarrassment to everyone else who has to be associated with these clowns. Let’s move before I start linking to their accounts…

Monday was a pretty slow news day around these parts, and by pretty slow, I mean nothing happened. We should get used to these slower days throughout the summer months. I guess the biggest story from the day came from KSTV’s one-hour interview with Mitch Barnhart when the UK athletic director said he is confident there will be a “marquee” non-conference game in Rupp Arena next season. UK is taking some heat for dropping the Indiana and North Carolina games, so scheduling a top tier opponent could help silence those haters saying the Cats are afraid they’ll lose at home.

The interview with Barnhart will air in two parts, Thursday and Friday night on KSTV.

Before Barnhart mentioned adding a marquee home game to Matt in the inteview, Calipari explained Kentucky’s scheduling in a post on his website. Cal said Kentucky hasn’t been a traditional team since he took over the job three years ago, so they will schedule in a nontraditional way. He said three things are considered when scheduling games:

1. Preparing the players for the postseason
2. The fans
3. Money

Calipari urged fans to join him in thinking nontraditionally and to ignore what everyone else is saying. “Do not listen to someone who has never coached or listen to media who are agenda driven for another program,” he said. “That includes fans from other programs. Don’t listen to those people and have them affect how we think, because they have no effect whatsoever on how I think. We’re in this together and we will always keep the Big Blue Nation’s thoughts in mind, but I have to protect this program and these players. We’re not traditional and we’ve got to think differently than everyone else.”

We also posted a quote from Cal that came from his KSTV interview outside the  Barnstable Brown party. He told our own Matt Jones, “You know, they always say this: You have about as much of a chance to get drafted as getting hit by lightning… unless you go to Kentucky.” I hope the nation’s top recruits caught that episode of KSTV — and I’m sure they did.

Fox 56 in Lexington ran a story on Ryan Lemond’s son Michael and his hero Eloy Vargas. You may remember young Michael’s story from the radio show or Larry Vaught’s website last week, but it has a new chapter after the two unlikely pals made a trip to the movies. Check out Fox’s video to see Eloy and Michael hanging out at the arcade and eating popcorn on their day out. It was a very cool thing for our boy Eloy to do.

That’ll do it for now. Come back tomorrow as we continue to chase Amile Jefferson and Julius Mays around in circles. See you then.