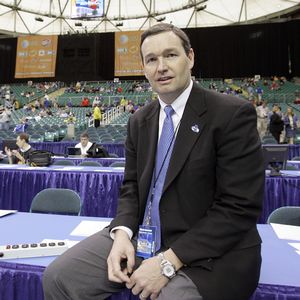 UK’s Board of Trustees approved a new contract extension for athletic director Mitch Barnhart, which will add three more years to his current deal and raises his salary to $600,000 per year.  He previously earned $475,000 annually and was cited for “exemplary performance” in earning the new deal.  The extension will keep him in place as athletic director through 2015 and ensures a shortage on sweater vests at Fayette Mall.  Damn you, Mitch!  You’re hogging all the sweater vests!

With his new deal in hand, it now seems that an extension for head coach John Calipari, currently signed through 2017, is next on tap.  In May of last year, Barnhart said that his goal was to get an extension for his most notable hire as AD and it doesn’t appear as if any movement has been made in that regard to this point.  You’d have to assume that his new security means he’s going to now make good on that promise to his Golden Goose.

28 Comments for Barnhart gets paid