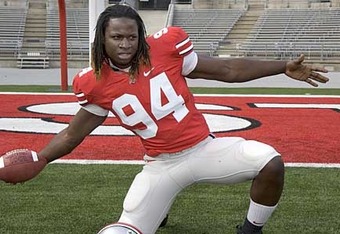 Possibly the worst-kept secret in the history of secrets is that former Ohio State Buckeye Keith Wells has been spending time at Kentucky’s practices the last several days.  The defensive lineman, rated by Rivals as a three-star prospect in the class of 2008, told our Aaron Cordero last night that he’s getting all of his paperwork together for UK to review in hopes of transferring and playing as a hybrid defensive lineman/linebacker for Rick Minter.  Wells played sparingly as a freshman before redshirting in 2009.  He will have two years of eligibility left.

13 Comments for Are The Cats About To Add A Transfer?