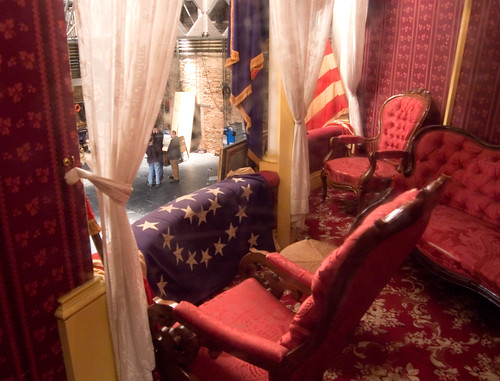 A diligent search for positives from Kentucky’s demoralizing weekend visit to the Swamp, and a look ahead.

Let’s get this out of the way. Saturday night was a debacle. An absolute savage beating at the hands of the hated Gators from the opening kick. Despite all of the talk about the narrowing of the talent margin between the programs, Saturday proved once again that Florida is simply at a different level than Kentucky. Even as a perpetual UK football optimist, I find it difficult to glean much to be happy about from a game in which freshman Trey Burton bested Al Bundy’s immortal Polk High touchdown record by two scores. Still, after much investigation, I was able to unearth a handful of positives behind that big orange and blue woodshed.

Playing without veteran starter Stuart Hines, the Offensive Line performed admirably in Gainesville. Florida’s defense may not have quite the ferocity of Saint Urban’s best teams, but the Gators still field as athletic a defense as you will see in college football. Add playing in the Swamp at night to the equation, and it would look to be a recipe for disaster. But the big boys up front handled themselves very well, paving the way for a 100 yard rushing effort from Derrick Locke, and allowing a single sack on Mike Hartline.

Urban Meyer’s Florida teams have, of course, fielded outstanding offenses and defenses throughout his reign of terror in Gainesville. But I would argue that for at least the last two seasons, the strongest phase of the program, with the possible exception of the criminal defense team, has been the Gator special teams. Other than a meaningless field goal block, Kentucky’s special teams fought the Florida special teams to a standstill. Mansour put his kickoffs in the end zone, Tydlacka punted well, and the Cats avoided the big play that has killed them in the past against the Gators. (See the two first quarter punt blocks in 2008 for example.) They even added a blocked extra point for good measure. All in all, a nice job for Coach Nord’s guys.

Kentucky managed just 14 points, a figure which I am sure genuinely disappointed Coach Phillips and the offense. Still, Kentucky put together 352 total offensive yards and moved the chains a total of 23 times. (To Florida’s 26.) And these were not Hal Mumme fool’s gold yards, racked up after the outcome of the game was no longer in doubt. Kentucky moved the ball, both on the ground and through the air, fairly efficiently throughout the night.

Matthews had a career day against Florida’s vaunted secondary with six catches for 114 yards and two touchdowns. His night also featured two of the more baffling call reversals you will ever see. One to the good and one to the bad. Is the replay booth in Gainesville equipped with radio only?

Just wanted to see who was paying attention. It was an atrocious day for the Cats’ defense. The issue was not so much allowing Florida 466 yards of total offense, but the absolute inability to stop the Gators on the most critical plays of the game: third and fourth down, and inside the red zone. For the game, Florida was successful on eight of twelve third and fourth down opportunities. They also scored touchdowns on all six of their red zone chances. But this is supposed to be a look at positives, so…Kentucky gave up fewer points than they have in at least three trips to Florida that I remember, and, contrary to what some of your friends may have told you, Steve Brown has not been in any way implicated in the death of George Blanda.

The Cats now look ahead to a trip to Oxford, ancestral home place of the bowl haircut. Many Cat fans are calling this a game Kentucky should win, based on Ole Miss’s horrific home losses to Jacksonville State and Vanderbilt. Though I certainly believe Kentucky has an excellent opportunity to win the game, I disagree with this premise. Kentucky and Ole Miss are essentially mirror images of one another statistically. Both rank near the top of the conference in most offensive categories and near the bottom in most defensive categories. The primary statistical difference between the teams to this point in the season has been turnovers. Ole Miss is minus six in that department, while the Cats are plus three. Reverse those numbers, and Ole Miss is likely undefeated heading into this one. Also, it would be a mistake to assume the Rebel team Kentucky will play Saturday will be the same one that lost to Jacksonville State the first week of the season. (Much like the Florida from this Saturday was not the same Florida who played Miami of Ohio.) It appears that the Rebels are coming around, as evidenced by last week’s 55 point explosion against traditionally stingy Fresno State. The folks in Vegas give the nod to the Rebels as well, installing them as a four point favorite. Thus Kentucky can win this game, but it is a stretch to say that its one they should win.

Anyway, I will be making the trek to Oxford to see what happens. If anyone else out there is going, meet me behind Jeremiah Masoli’s halfway house on Saturday morning. Should be a good time.