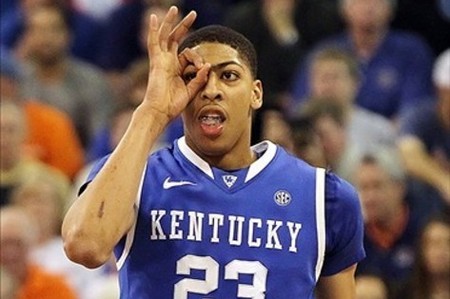 Bill Simmons of Grantland.com thinks so. Since Dwight Howard went down with a herniated disk and is out for the season, there is a big hole down low for Team USA in the London Olympics this year.

The tenth is up in the air. Blake Griffin? Chris Bosh? LaMarcus Aldridge? Andrew Bynum? How about the unibrow.

It’s the no-brainer of no-brainers! Anthony Davis just won an NCAA title. He protects the rim like nobody we’ve seen since a young Dikembe Mutombo. He’s the ultimate teammate, someone who can affect basketball games without taking a single shot. Unlike Bynum, we won’t have to worry about him screwing up team chemistry. He’ll be the ultimate happy-to-be-there young guy. He’ll even happily settle into that always-enjoyable role as the whipping boy rookie who has to carry everyone else’s bags and stuff. And by the way? We might actually need him! What am I missing? GIVE US THE ‘BROW! USA! USA! USA! USA!

What do you think about Anthony Davis making the Olympic squad and playing with these all-stars in London? Talk about some publicity for Big Blue Nation — he’ll take the pride of the Bluegrass international and leave an indelible mark on modern Olympics.

The last Kentucky Wildcat to play in the Olympics was Tayshaun Prince in 2008. Before that was Sam Bowie in 1980.

Coincidentally, the last time the Olympic Games were held in London was in 1948, when the Fabulous Five of Ralph Beard, Alex Groza, Wah Wah Jones, Cliff Barker and Kenny Rollins won the gold. It’s destiny for more Kentucky blood to be back in London.

22 Comments for Anthony Davis in the Olympics?