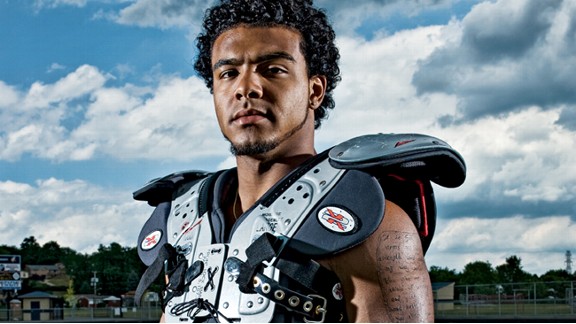 He rushed for 641 yards and four touchdowns as a true freshman at Pittsburgh last season. This spring, he was listed as the Panthers’ No. 1 running back. Then in April, he announced he would transfer to UCLA and enroll in classes this summer.

But two twin daughters in Pennsylvania raised second thoughts about transferring to the west coast, so Rushel Shell decided to return to Pittsburgh for a sophomore season. The problem is, Pittsburgh head coach Paul Chryst didn’t welcome him back with open arms. Instead, he told Shell he’d have to find other opportunities to continue his college football career.

Mark Stoops recruited Shell while at Florida State and was aware of his current situation, but assumed he would return to Pitt to be the starting running back as a sophomore next season. It wasn’t until the Davis twins — Shell’s teammates at Pitt last season — told Stoops about Shell’s predicament, that he realized the running back was available and looking to transfer to an FBS program relatively close to home.

Now the four-star Pennsylvania running back, ranked sixth at his position and 55th overall in the 2012 class, is down to Kentucky, Ohio State and West Virginia for his next destination. He plans to visit all three schools this summer and make his decision before fall camp begins in August.

Shell will have to sit out the 2013 season but will have three years of eligibility remaining beginning in 2014.