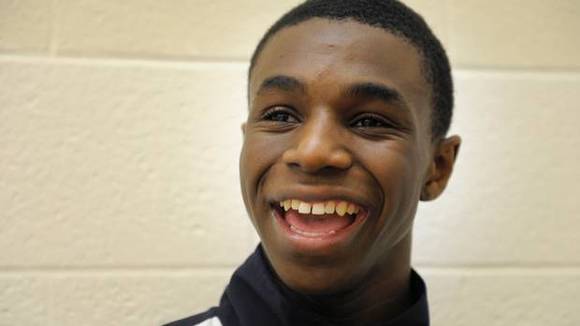 The Nike Hoop Summit has been a positive experience in the past for Andrew Wiggins. Wiggins really burst onto the scene last year for the World Team when he led his team to a victory by pouring in a team-high 20 points. Wiggins will look to repeat some of that magic tomorrow night as he once again will lead the World Team against some of the best American high school basketball stars in the country.

Tomorrow night will be Andrew Wiggins’ final basketball game as a high schooler. Wiggins plans to leave on a good note, “I wouldn’t want to play my last game and lose.” Wiggins’ goal is to change the World Team’s luck by winning in consecutive years for the first time in Nike Hoop Summit history.

Wiggins’ teammates speak very highly of him and his motivation for the upcoming game. “He really takes on whatever responsibility is needed,” said teammate Roy Rana. “…He’ll have the flag on his jersey and he’ll take it seriously. He’s such a giving person… it’s not really about him, it’s what he can give others.”

31 Comments for Andrew Wiggins still doesn’t know, and neither does anyone else