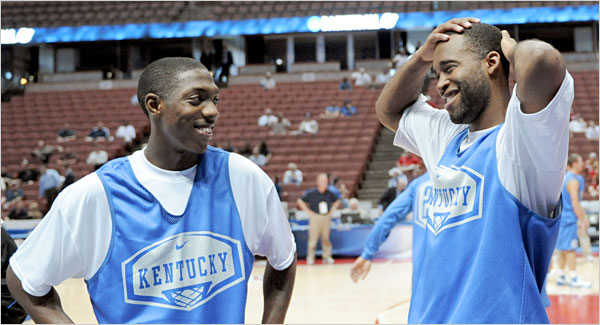 After spending the past few weeks touring the Bluegrass and taking on the finest middle aged former high school basketball players that Kentucky has to offer, Joe Crawford and Ramel Bradley will take the next step on their basketball paths this weekend in Orlando. The pre-draft camp is an invite-only affair and both former Kentucky players will be in the group participating in all of the events, beginning with drills on Wednesday and then ending on Friday with a tripleheader of games.

In terms of point guard comptetition, Bradley will try to outshine Ty Lawson of North Carolina, Michigan State’s Drew Neitzel, Virginia’s Sean Singletary, Alabama’s surprising declaration Ronald Steele and Gonzaga’s Jeremy Pargo. There are plenty of wing players for Crawford to battle with, but the tops should be North Carolina’s Wayne Ellington, Colorado’s Richard Roby, Vandy’s Shan Foster and J.R. Giddens of New Mexico. The top prospects, including Derrick Rose, Michael Beasley and O.J. Mayo will be attending as “Physical Only” attendees and will not participate in any of the workouts. For all of the information and a full list of players, you can go here.

Right now, NBADraft.net has Crawford listed as their 95th best prospect and Ramel Bradley is not rated at all.