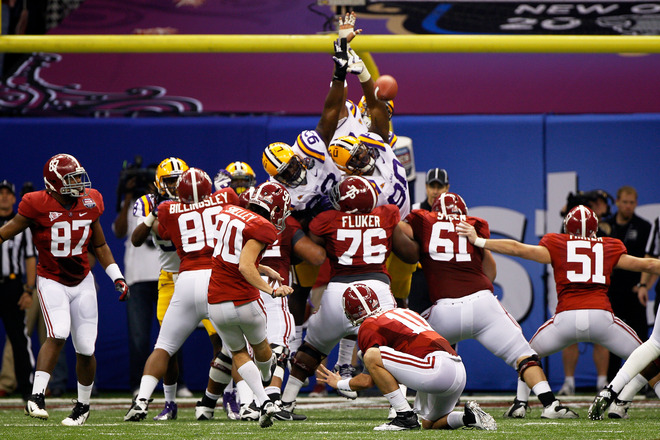 (This picture says it all.)

Well, that was fun to watch.

Alabama won its 14th National Championship over LSU, 21-0, in a snoozefest of a game in the Superdome. Neither team even scored a touchdown in the game until Trent Richardson broke loose late in the fourth quarter to put the game away for the Crimson Tide. LSU’s offense hung a goose egg on the scoreboard and only managed to pick up five first downs and less than 100 yards of total offense in the game. It was the first shutout in BCS title game history.

College football is over. Let’s move on.

— Monday marked the last day of ‘Camp Cal’ basketball practices for the team. With school starting back on Wednesday, and Tuesday being a travel day, Monday was the last day of rigorous, unrestricted practicing during the winter break. Cal has been practicing his guys two and three times a day since the fall semester ended, with a three-day break for Christmas after the Loyola game. Things will return to a normal, balanced schedule for the players when they return from Auburn.

— If basketball practices are your kind of thing, you can read Calipari’s practice report on CoachCal.com. There is a lot of insider info in it, including what exactly the team has been working on and Eloy Vargas nearly throwing up. It’s a very good read from the always well-dressed Eric Lindsey.

— It really is a shame that the local media still hasn’t mentioned the controversy surrounding the halfcourt shot from Saturday’s UK game. It’s all over the Internet and even popped up as a topic of discussion on Monday’s episode of Around The Horn when JA Adande and Woody Paige both agreed Vincent deserved the money. So, if this story is so big, why is there no mention of it in the Lexington Herald-Leader or the Courier Journal? How can a story that made Headline News and the front page of Yahoo! news not even get a mention in the two newspapers that cover the team and had multiple writers in the building that day? I’m baffled. We like to kid the newspaper guys for their ancient ways and being oblivious to the change in media, but this is pitiful and likely because of KSR. You see, Wes (bearded guy) came up to us during the game and asked for help getting the word out that Vincent might not get his money. We put it on Twitter, therefore, breaking the story and killing any chance it had of making the locals news. The newspapers would have to credit us if it was published, and we all know the LHL and CJ would post a photo of Jerry Tipton sawing off Scratch’s head with a pistol sword before they’d even mention KSR on any format. It’s sad, not for us, but because newspapers really don’t get what people want these days. It was one of the biggest sports stories of the weekend and it went unmentioned in the two biggest media outlets that cover UK. They still don’t have a clue.

— Coach Cal picked up his phone and talked to the media during Monday morning’s SEC teleconference. Listen to the 6-minute, 54-second phone call here.

“On Monday, May 22, Pitino flew to Lexington. While at dinner at the city’s well- known Coach House, he was approached by Jerry Tipton of the “Herald-Leader.” Would Pitino care to comment on a 1977 NCAA report implicating him in eight of 64 rules violations that led to two years of probation for the University of Hawaii?

At 10 o’clock that night, Newton knocked on the door of the condominium where Kentucky officials had hidden Pitino for the trip (no more Radisson hotels for candidates). He had heard about the incident at the restaurant and was aware of the Hawaii/ NCAA story that would appear in the next day’s “Herald-Leader.” He was there to cut his losses.”

We honestly don’t mean to keep picking on Tipton; he just makes it so easy! (Read more here.)

— Julius Randle, the No. 2 player in 2013 according to Scout.com, visited all of North Carolina over the weekend. You can read about his crazy weekend in the First in Flight state on his ESPN blog, but the abbreviated version is that he visited NC State on Friday and did a lot of bouncing back and forth between Duke and North Carolina on Saturday. Randle wrote that he plans to visit Kentucky and Ohio State, and he can’t wait to do so. “I hope those fans are ready to see me,” he said. Randle is an absolute freak of an athlete at 6-foot-8, 235 lbs. He’s one of the most sought after high school recruits in the nation right now, regardless of class.

— In other recruiting news, Khem Birch will transfer to UNLV. Birch decommitted from Pittsburgh in mid-December and was rumored to be considering Kentucky. We learned a few days after he decommitted that UK did not an option for the 6’9 power forward, and now we know he’ll end up with the Runnin’ Rebels. Birch was also considering Florida. (This shouldn’t affect Shabazz Muhammad. We hope.)

— A lot has been mentioned of Alex Poythress and Archie Goodwin’s performances at Lexington Catholic over the weekend, but I’d like to throw my two cents out there as well. First, Archie Goodwin did exactly what fans expected to see out of him. I didn’t arrive until late in the second half, but Archie showed me enough to know that he is going to be a great scorer at Kentucky. And then there is Alex Poythress. Get out of his way. Poythress dunked all over anyone and everyone who got in between him and the goal. It’s one thing for a big, athletic guy to dunk on undersized opponents, but it’s another thing for a big, athletic guy to have his chin above the rim or to throw one down after leaving the ground from just inside the foul line. I knew he was good, but I had no idea he was this good. He should climb up the rankings this season. Beisner will have more from the two tomorrow.

— Stick around tomorrow when we release the KSR podcast from the Lexington Catholic game. It has been over a year since we did one of these so it’s long overdue.