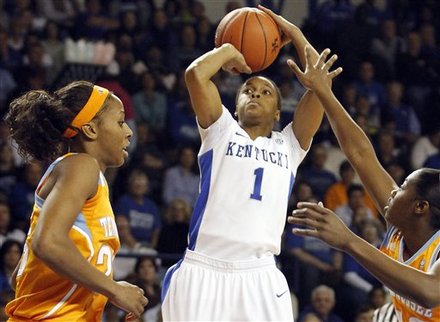 The ninth-ranked Lady Vols came into a sold-out Memorial Coliseum Thursday night, and left with their first SEC loss in 37 consecutive conference games. No. 9 Kentucky stretched its home winning streak to 15 with the win and moved to 4-0 in conference play for the first time in school history. Everyone in blue and white played great, but none of this would’ve happened without the unbelievable performance by A’dia Mathies. Mathies scored a career-high 34 points to lift UK to a 61-60 victory over Pat Summit’s bunch. It was the most points scored by a UK player since 1987. The 33rd and 34th points were the two most meaningful for Mathies, as she drove to the bucket and scored between two defenders to give Kentucky the lead with four seconds left in the game. Tennessee got a good look on the other end to win it, but the shot came up short and clanked off the front rim.

Before having to come back and end the game on Mathies’ final bucket, Kentucky held a 12-point lead over Tennessee with just over seven minutes left to play. Sloppy defense and missed shots on offense let UT back in the game, and the Vols were out front for all but four seconds of the final 2:38. The final four seconds were all that mattered, though. After the game, Matthew Mitchell spoke about how his team regained composure after giving up the big run. “We had complete control of the game and that was a devastating run. For a team to have the character to come back, even when it was not looking good, and win was great. A’dia really, really played well.” Yes, she did.

The win snapped a four-game losing streak to Tennessee. It also earned A’dia Mathies her very first edition of the News and Views…

— With the first SEC road game behind them, Kentucky’s men’s basketball team moves on to road game No. 2 when they travel to Knoxville to take on the low down dirty snitches on Saturday. If Kentucky plans to pick up its third conference win, they’ll have to play much better than the way they did at Auburn. Auburn is, without a doubt, the worst team in the conference, and it took Kentucky 30 minutes to separate from the Tigers and get the win. A similar performance from the Cats may not result in a win against a much-improved Tennessee team. The Vols knocked off 13th-ranked Florida last weekend and almost pulled off another upset on the road at 15th-ranked Mississippi State Thursday night. This isn’t the same Tennessee team we laughed at earlier in the season.

— If you watched Tennessee at Mississippi State, you might’ve noticed Jarnell Stokes sitting over on the Tennessee bench. Stokes, of course, joined the team just a few weeks ago and had his first practice with the Vols on Monday. The 6-foot-8 rock solid power forward is eligible to play immediately, but UT coach Cuonzo Martin says he is holding him out until he is ready. Something tells me we’ll see him make his debut in orange on Saturday against Kentucky, the team he considered joining before he signed with the Vols. Also, if you watched Tennessee at Mississippi State, you saw that Renardo Sidney has not only gained a few pounds but he looks like he ate a bucket of Mississippi State cheerleaders.

— Tubby Smith and his Golden Gophers of Minnesota took down No. 8 Indiana in Assembly Hall on Thursday night. Minnesota led through most of the game but almost blew a nine-point lead with just over a minute to go. Indiana’s miraculous comeback — it was almost unbelievable to watch — fell short when Christian Watford missed a three-pointer to tie it up at the end of the game. Of course, he misses the one against Tubby. Why couldn’t he miss the one against Kentucky?

— The only three certainties in life are death, taxes, and Asian kids on TV when ESPN pans the Duke student section.

— A veteran NBA executive said teams are now considering taking Michael Kidd-Gilchrist with the first pick in the NBA Draft. According to NBA.com, “a respected talent evaluator and a man who has been successful in the Draft” believes the race for the first hat is up in the air between Anthony Davis, Andre Drummond, Harrison Barnes, and now MKG. Kidd-Gilchrist’s high-intensity, energetic style of play in every game is wowing NBA scouts and execs. Could UK have the No. 1 and No. 2 picks in the draft?

— According to Adam Zagoria, Chris Thomas, Rivals.com’s No. 1 shooting guard in the class of 2013, says he hasn’t heard from any of UK’s coaches in months. Kentucky is hard after the Harrison Twins for the guard spots in 2013, but Thomas is still an elite talent in what is arguably the most talented recruiting class ever. Off the court issues could hurt him in his recruitment — Zag’s source called him a “high risk, high reward” player — but I haven’t seen any signs of negativity in Chris Thomas’ blog posts on KSR. In fact, I think they’ve been just fine.

— When Western Kentucky fired head coach Ken McDonald last Friday, John Pelphrey’s name popped up almost immediately as a potential candidate to take over the Hilltoppers. The former “Unforgettable” at Kentucky is currently in his first season back on the Florida Gators’ bench as an assistant under Billy Donovan. The WKU Herald reached out to Pelphrey earlier this week to see if he had any interest in the Western job, but Pelphrey respectfully declined an interview with the newspaper. The Florida SID told Cole Claybourn of the WKU Herald, “If that changes, I’ll be sure to let you know.” Pelphrey is obviously focused on his current team as conference play gets rolling, but he’d be crazy to not at least entertain the idea of taking the job. He’ll need a stepping stone head coaching job before he can get back to a major program, and there isn’t a better situation out there for him than the vacancy in Bowling Green.

— Nazr Muhammad’s brother threw down one of the nastiest dunks you’ll ever see over in Kuwait. (Before you say it, yes, I know he played for Louisville.)

While Alhaji Mohammed’s dunk was unreal, three things really stood out to me from the clip: (1) The defender’s kicking backflip (2) The incredible announcing (3) The excessive amount of replays.

— I didn’t see this myself, but I’ve been told Skip Bayless took a few shots at Kentucky on ESPN’s SportsNation Thursday afternoon. According to a couple of KSR readers, Bayless said the Cats are very selfish and have no team chemistry. Now, I’ll be honest, I’ve thought the same thing a few times this season after certain stretches, but I don’t think you can say that about how they’ve played all season. And we certainly don’t want to hear it from a Vandy alum who only wants attention for the ludicrous things he says on television. Stick to Tebow, Bayless.

That’ll do it for now. Tune in to Kentucky Sports Radio radio in the morning when I join Matt Jones for a fun-filled Friday in the snow.