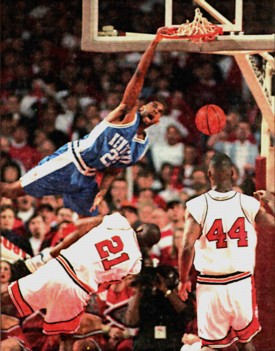 Some news broke regarding the U of L basketball team today as WAVE3 is reporting that the Filthy Card duo of Jerry Smith and Terrence Jennings were arrested last night in Jeffersonville, Indiana at some sort of banquet hall that seems too classy for Louisville players.  If I had to bet on a wedding foul, it would have been on Pitino, but I guess some sort of ruckus broke out and the pair found themselves chared with resisting arrest.  No word yet on what punishment, if any, the will receive, but it will likely be rescinded by Rick Pitino well before it is fully served.

Meanwhile, in Lexington, the big news around the program is that Daniel Orton saw a hot girl working at Qdoba today and wondered if she had a boyfriend (via Twitter).  So, young lady, if you didn’t have a boyfriend when you woke up this morning (and even if you did, it doesn’t matter), you do now.  His name is Daniel, but you can call him Big Daddy.