Labeling and breaking things and people down into various categories is almost part of our nature. People love to make lists. People love to read lists. People love to argue over lists and debate which parts of the list they would omit and what they would add to the list. By now, we’ve seen plenty of “Favorite UK Player of All-Time” lists, or “Best Player of All-Time” lists, or “All-Time Starting 5” lists, etc. In light of the Brandon Knight news yesterday that he had been traded from the Pistons to the NBA’s least exciting organization (the Milkwaukee Bucks), a different type of list came to mind. In regards to the Knight news, I heard a few UK fans say things like, “I really wish something good/better would happen to a guy like Brandon Knight.” We inevitably feel a connection to many of these former Kentucky players who gave us so much joy as fans during their time in Lexington. As these players move on from the happy cocoon of love and adoration from the Big Blue Nation, we wish them well and generally hope for nothing but the best for all of them. Every now and then though, a particular player will endear themselves to us for hardships, struggles, injuries, beating the odds, or under-appreciation (among other possible things) they incurred while a part of Kentucky basketball. For one reason or another, we find ourselves hoping even a little bit more that good things will happen to these players because either a) They really deserve it or b) They’ve been on the unfortunate end of some circumstances in the past.

Looking back over the last 10-15 years, the following players really stood out at Kentucky players from the past who many fans took a little extra vested interest in rooting for as they moved on from the Kentucky basketball program. As we all enjoy doing with any kind of list, feel free to add, subtract, agree or disagree with any of the following (in no particular order):

Derek Anderson was likely the missing puzzle piece for Kentucky’s potential to win back to back titles in 1996 and 1997. Anderson tore his ACL and subsequently missed the 1997 national championship runner-up run for the Wildcats. Even more heartbreaking than the loss itself was how close Anderson was to being able to play by the end of the season. Some controversy even surrounded the decision in the years following the game. It was hard to see Anderson miss out on his senior season for Kentucky, while also watching his draft stock fluctuate due to the injury. I think we all felt for Anderson and hoped that his high flying athleticism would return to form post-injury.

Eric Bledsoe was probably the last person to make the cut for this list. Bledsoe enjoyed a successful one-year freshman season at Kentucky before being drafted in the first round of the NBA Draft. Even though Bledsoe gladly filled the role and didn’t cause any waves about the situation, he was second fiddle to John Wall as a point guard while at Kentucky. Even though point guard was Bledsoe’s natural position, he often found himself playing the off-guard alongside Wall. Wall garnered much of the accolades and attention, while Bledsoe bided his time. Bledsoe had to wait for a few years in the NBA as well before finally getting the opportunity to be “the guy” for a team. Now, it looks as if the Suns are planning to make him the starting point guard. I think we all knew the time was eventually coming for Bledsoe and hoped that he would one day get his moment in the spotlight. That moment has arrived.

Perhaps not at the time, but as we look back upon Keith Bogans’ time at Kentucky, he will probably go down in history as one of the most underrated and under-appreciated players of his time. Bogans is a top 5 all-time career scorer for one of the most storied, if not THE MOST storied programs in college basketball. As good as Bogans was, and as productive as Bogans was– he often gets left out of the conversation when it comes to the all-time greats. Bogans never won a national championship and ended his Wildcat career limping off the floor against Dwyane Wade’s Marquette in the Elite 8. That Kentucky team was worthy of a national championship, and a healthy Keith Bogans might have been enough to make it happen.

I don’t think much needs to be explained when it comes to how much Josh Harrellson endeared himself to Kentucky fans during his breakout senior season on the way to leading his team to a Final 4. Harrellson came out of nowhere when Kentucky was in desperation mode after learning of Enes Kanter’s ineligibility. Harrellson’s breakout performance/role quite possibly saved the season for Kentucky. When the wind started picking up that Harrellson just might have worked his way into the conversation for a few NBA teams to take a chance on, Kentucky fans could hardly believe it. Harrellson had gone from a non-factor to one of the most improved players in Kentucky basketball history. Everyone was rooting to hear his name called on draft night. Harrellson was a true underdog story in the flesh.

Out of all of the sad, disappointing and disheartening stories to come out of the Billy Gillispie era– there is perhaps no sadder one than that of Derrick Jasper. Gillispie pushed Jasper to return to the court well before he was ready, jeopardizing the rest of Jasper’s basketball career. Jasper was an uber-athletic guard with great size who had a bright future ahead of him. After a year of pushing his body in a way he shouldn’t have, Jasper’s career was never the same. I think we all wished for good things for a poor young kid who had his career toyed with by a delusional and irresponsible adult. 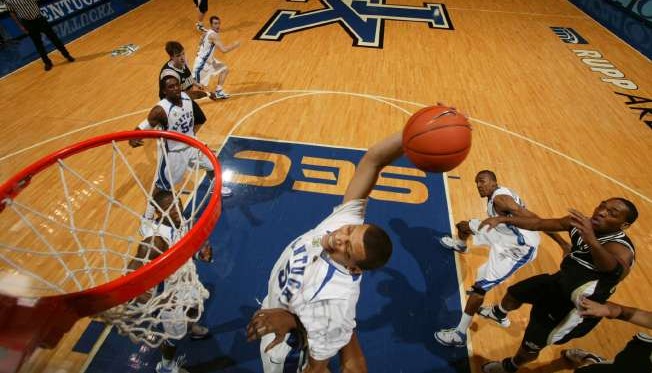 The NCAA sucks. Enes Kanter genuinely longed to play college basketball and had that opportunity stripped from him by the NCAA in a decision that still lingers as very questionable. Regardless of where you stand on the issue, hearing that Kanter was moved to tears when he found out he wasn’t going to be able to play was heartbreaking. Kanter had to spend an entire year watching from the bench, missing the competitive game of basketball. We all wished for a positive basketball experience when he moved on to the NBA.

Brandon Knight is similar to Keith Bogans in a lot of ways. As much as we loved him during the Final 4 run when he was such a clutch part of the biggest moments, becoming the star on that team, generally speaking his Kentucky career is vastly underrated. With all of the high power/super star freshmen John Calipari brings in, Knight’s quiet personality often causes him to be lost in the shuffle.

Similarly to Josh Harrellson, Liggins’ career was reborn when Gillispie left and Calipari arrived. Liggins transformed his game from an out of control but athletic player, to an incredible lockdown defender who took pride in the task at hand. No one worked harder on the defensive end than DeAndre Liggins. He sacrificed a major role in the offense and instead devoted his focus and attention on stopping the other team’s best player in many situations. I think we were all hopeful that the sacrifice and commitment to that craft would pay off for Liggins as he made the jump to the pros.

Whether it be basketball-related or off the court, I think many of us have a soft spot in our hearts for Uncle Julius and wish him the best moving forward. His one season at Kentucky was not the most fruitful and certainly didn’t live up to the expectations when he transfered to a program for his final year of eligibility. Mays wasn’t a star, but he over-achieved in a bigger role than was originally planned for him. Mays took on the leadership role and generally became one of the fan favorites during a tumultuous season.

It took a while. It took a long while. But the Darius Miller we always knew was somewhere inside of him finally emerged by the end of Miller’s senior year en route to Kentucky’s national championship. Fans waited and waited, knowing that Miller could be a special player. Even though Miller was never necessarily the “Star” of the team, and sacrificed a starting spot as a senior, he finally came into himself at the end of his Kentucky career. At times, the NBA seemed like a far off possibility for Miller… a bit of a “if he finally fulfills his potential it could happen” type of thing. For a Kentucky boy, I think we were all rooting for him to not only win a national championship, but to reach his dream of playing in the NBA. For a career that started awfully rocky under Billy Gillispie, it couldn’t have ended on a much higher note.

First it was the gruesome ACL tear. Then it was watching Noel’s face as the draft picks continued to roll by without his name being called. Noel went through some tough times in his short time in Lexington and I think people are ready to see something good happen to a kid who by all accounts, is a very good human being on and off the court.