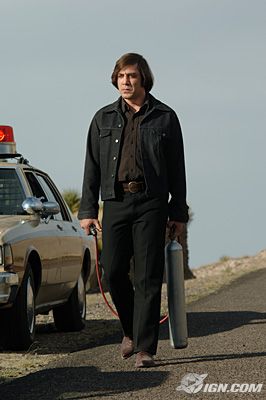 Last night I made a stop at the Baxter Avenue Theatres to see “No Country For Old Men”, the latest Coen Brothers project and a movie that has been getting huge critical praise. After getting the official “its a great movie” text from Tomlin, a chica and I went to watch the great Tommy Lee Jones and Kentucky’s own Woody Harrelson and see what the buzz was about. Coming out, one thing is clear….this is a movie that (like the television version of “Friday Night Lights”) you GOTTA see.

The Coen brothers take the usually ultra-depressing Cormac McCarthy’s 2005 work and knock it out of the park with one of the better suspense, edge-of-your-seat films that I have ever seen. While Jones and Harrellson get the pre-film praise, the show is stolen by Josh Brolin (who plays country bad-ass better than anyone not named Stone Cold Steve Austin) and Javier Barden (who the chica insisted was Benecio del Toro). Barden plays one of the scariest psychos that I have ever seen on the big screen, terrorizing everyone he comes near and doing it with a hair cut that even I could mock. Their cat-and-mouse game draws you in from the beginning and never lets you go…..throw in a few Tommy Lee Jones and his folksy lines of philosophy and the movie is my best of the year. The ending will leave some upset, but even if you dont like it, look past it and just praise the movie as whole. No its not “Monday Night Raw” or “The Hills”, but it is still pretty damn good.