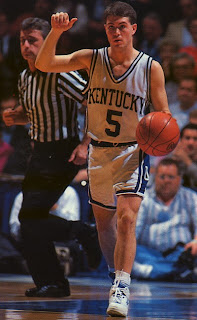 –Via John Clay’s blog, a brief story with Travis Ford in The Oklahoman in which he recounts his favorite sports moment and, not surprisingly, he chose the Mardi Gras Miracle of 1994. Ford also refers to the 1992 Duke game as “a great learning experience,” which is about 47 notches higher on the politically correct scale than what I call it, but it’s interesting nonetheless.

–The other link comes from the always fine folks over at A Sea of Blue. They took a moment to look back on Cawood Ledford, the longtime voice of the Cats, as the anniversary of his passing was this past Saturday. Cawood is easily one of the most beloved figures in the annals of the Big Blue and his words were woven into more Kentucky history than most of us could ever imagine. He was quintessential Kentucky, and it’s always worth taking a minute to look back on one of the best to ever broadcast.