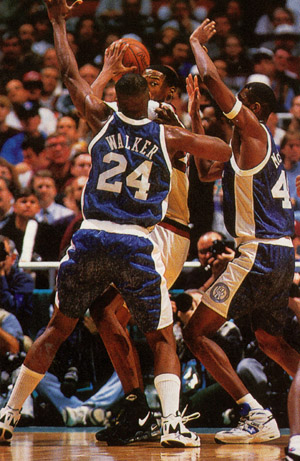 Every Wednesday morning we will look back at a great moment in UK basketball history. ENJOY!

EAST RUTHERFORD, N.J., March 30 — They had very little experience with the business of losing, just one misstep through a winter the Massachusetts Minutemen were true to themselves, right down to the very last final buzzer of their season.

They were behind by 15 points with 18 minutes to play. They trailed by 10 with 2 minutes 35 seconds to go, a defeat seeming more and more certain. “Ninety-nine percent go under with the pressure we were applying,” said Rick Pitino, the Kentucky coach and Massachusetts alumnus.

The Minutemen refused. They still would lose. But the Wildcats, who had turned the national collegiate tournament into an extended highlight film, were pushed en route to a 81-74 victory in a way they had not been challenged in the last two weekends.

Kentucky advanced to the championship game Monday against Syracuse with a chance to earn its first title since 1978 and a sixth over all. Massachusetts, 35-2, lost its chance to become the first New England team to reach the title game since Holy Cross, the 1947 champions.

Kentucky, 33-2, used a purposeful interior defense that required Marcus Camby of the Minutemen to work for his game-high 25 points. Camby made 9 of 18 shots, 6 of 9 in the second half as UMass manufactured its comeback.

But that is as close as UMass would come. Kentucky extended one of the most telling winning streaks in its seven seasons under Pitino. For the 14th consecutive time, the Wildcats defeated a team they had lot to earlier in the same season. The Wildcats, who were forced to use their final timeout with two minutes to play, were nearly flawless in the final minute. In a memorable display of their trademark balance, five different Wildcats scored the final 10 points to hold off the comeback.

“When it was time to do it, we didn’t do it.” said Edgar Padilla, the point guard of the Minutemen, who had 12 assists and only 4 turnovers despite having to deal with the force of Kentucky’s pressure defense for 39 of the 40 minutes.

Kentucky made its last eight free throws, a sign of its efficiency at the most important time. The four previous Wildcat tournament victories had been by an average margin of 28.3 points, with no margin less than 20. If ever there was a time for panic, this was it. If there was any sense within the Kentucky dressing room that this season would be a failure without a national championship, it was not visible tonight.

“We don’t care about pressure,” said Antoine Walker,a sophomore who helped in the defensive effort against Camby and scored 14 points. “That’s good, pressure. It makes us work hard. Everybody expected us to fold this year. When people try to put us down and think we’re going to fold, it makes us work harder and harder.”

Tony Delk, a point guard in a brief experiment when these teams last met on Nov. 28 in a 92-82 UMass victory, scored 20 points on 7-of-16 shooting, overcoming leg cramps in the final minutes. Walter McCarty had 8 points, 10 rebounds and a long night of effort on the inside. With McCarty bearing much of the responsibility, the Wildcats squeezed Camby at every opportunity in the first half. They forced the national player of the year, who had scored 32 points in the first meeting between the teams earlier this season, into an uncomfortable series of poor judgments.

“I probably needed to be a little more aggressive when the double team came,” Camby said. “They were knocking balls out of my hand and forcing me to take shots I didn’t feel comfortable taking.”

By affecting the strength of the Minutemen, the Wildcats began to sap UMass of the emotion that made its season so successful. “We’re not a good enough club when they have that advantage,” said John Calipari, the coach of the Minutemen. He ranted. His team responded.

Kentucky had begun to establish control during a 11-2 stretch in the first half, when four of five field goals were the result of UMass turnovers. Camby endured a stretch of 15:44 without a field goal, a span that extended until a dunk with 15:59 to play in the second half.

It was during that span, early in the second half, when two fouls against Carmelo Travieso in a span of 13 seconds sent the junior guard to the bench. But with Giddel Padilla, a senior and Edgar’s older brother, making a rare appearance, the Minutemen came back. When they were within 3 points, 63-60, they were unable to score on three consecutive possessions.

The first two – a steal by Anthony Epps and a missed 3-point shot by Travieso — could have brought the Minutemen within a point. “We didn’t play their game,” Calipari said. “They played our game. They beat us at our game.”