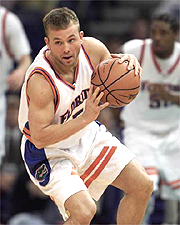 One of the first of many irritating white guys under Donovan.

In case you’ve had a massive void in your life directly due to lack of news related to irritating former Gators believed to be compulsive gamblers, then this story is for you.  Former Florida guard Teddy Dupay, was charged with rape, aggravated sexual assault and aggravated kidnapping after an incident with an ex-girlfriend in Utah.  These charges threaten to bring to an end one of the greatest telemarketing careers of all-time.

I hate Dupay as much as anyone, but it might not be fair to rush to judgement.  I believe that winking and high-fives are considered sexual assault in Utah, although I’m not entirely positive.  You might want to look it up.