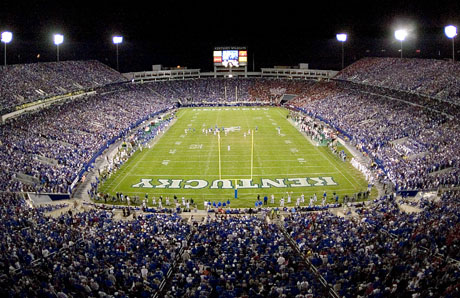 The final numbers on the spring game ticket distribution have finally arrived. According to the Courier-Journal, the University of Kentucky sold 49,000 public tickets, while another 11,000 were handed out to area public-school children. The area middle school and elementary school tickets were used as incentives in class to earn 1 of those 11,000 tickets.

To put things into perspective, Georgia had 45,113 in attendance for its spring game this year. Kentucky could beat that. Now, the stadium may not be filled with exactly 60,000 people, as some bought large chunks of tickets and might not use them– but the numbers are very good for Mark Stoops’ first spring game. The excitement surrounding the football program is palpable and tomorrow will be a great way to keep the momentum rolling.

22 Comments for 60,000 total tickets distributed for the spring game