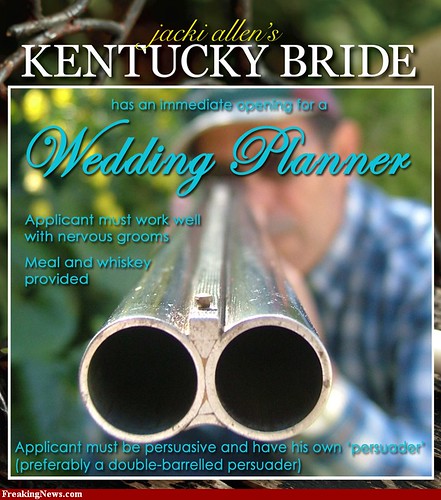 On this day nine years ago, against everyone’s better judgment, my wife caved and offically became my better half. Whoo-hoo! That means we are eating at a restaurant that has free breadsticks tonight! (Do I know how to pitch woo, or what? Sorry, ladies. I’m taken).

We share our aniversary with the Supreme Court decision that upheld William Goebel’s election into the office of Governor of Kentucky back in 1900. The election was a mess (it resulted in the assassination of Goebel and was ripe with corruption) and is a good story to look over when you think politics in this day and age are brutal and barbaric.

Since this is sort of a slow news day and I have to get my wife some shoes for a job interview, I’ll post 5 quick points of interest that did cross my Google-machine today:

1) In news that will make you feel even better about the future of the Big Blue, The Chicago Tribune says that a Bull’s source says that no player will name the coach. That includes one particular free agent friend of our Coach Calipari. When the Bulls are pulling out the we-didn’t-even-let-Michael-do-that card, I tend to believe them. Tony Kornheiser had Sam Smith on his radio show this week and he talked about the way the Bulls handled Jordan’s initial dislike of Phil Jackson. How’d that turn out? Pretty good?

2) Larry Vaught has a nice article about how Joker Phillips and the football team significantly influenced UK’s varsity sports cumulative average GPA. The football team is important because if they do well, their shear numbers cause that whole rising tide lifts all ship thing. Since JP took over the team, they have jumped from a combined 2.35 GPA in the fall to 2.66 this spring. That puts Coach in the good graces of his boss, Mitch Barnhart, who strives to gain an average of 3.0 for all of UK sports. You know, I think this Joker guy “gets it”.

3) Staying with football and feel-good stories, former WR/CB Anthony Kelly (They say his nickname is “Champ” but I’ve been told all guys with the lastname of Kelly should be nicknamed “Shipwreck”. I’m down with that) has returned to his high school in Jacksonville, FL and is conducting a high school football camp this summer. It is a good read that follows Kelly’s path after college to IBM and eventually back to football as a scout fo the Denver Broncos. Former UK teammate Lee Wesley is also working the camp with Kelly. Says Kelly, “I’ve always felt a need to give back, and I have a passion for children. I just wanted to combine my love for kids and knowledge for football, and start off by doing these camps.” Good on ya, Anthony.

4) BTI already hit on this in the morning post but Justin Knox graduated from Alabama and can apparently transfer to North Carolina for his senior year and play immediately as long as he majors in something UNC has that Alabama doesn’t. Considering it is Alabama we are talking about, that shouldn’t be too hard or a task to accomplish. I hear the locals keep burning down the Engineering Building because “all that thar fancy teck-nawlegy” is “from da devil”. Anyway, I am linking this piece from the newsobserver simply because it also has a picture of Boogie and Boogie is awesome.

5) Sports Illustrated has a great article about Lexington native Shelvin Mack. Unless they go some place gross (like Tennessee), I tend to root for Kentucky kids that end up playing college ball elsewhere. Mack is a great story and, if UK couldn’t get to the title game, I’m glad he helped Butler reach new heights.