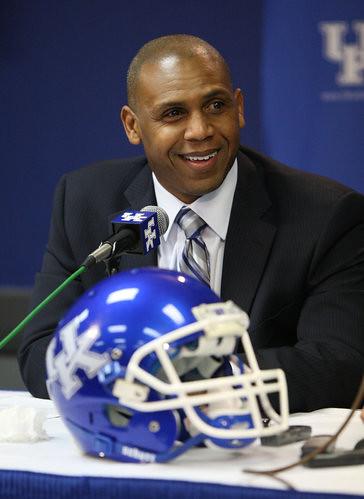 We are a mere 40 days away from the kick-off of the 2010 Kentucky Wildcat Football season. I hope you are as excited as I am. If you aren’t, here are a few items from the web that will get your juices flowing:

1) The guys over at The Bleacher Report rank the coaches and their performance at the SEC Media Days. Guess who comes in at #1? Joker tops the rest of the HC’s based mostly on his energy and force of personality. Says Joel Barker:

Joker Phillips was extremely impressive on the first day of SEC Media Days. He talked of his “Operation Win” plan with the fervor and passion of a pastor beckoning his parishioners to spread the good news.

Preach the word, Brother Phillips. Can I get an Amen and a First Down Kentucky?

2) Larry Vaught has his usual great coverage of the Blue Gridiron and has a profile on the Locke and Cobb combo. Cobb takes the cake with his offer to play DB in addition to his normal duties, but the quote that pays is this one from Joker:

Like, on the goal line against South Carolina or something, right? Looks like Joker is going to use Cobb early and often. I like the way this whole deal is shaping up.

3) Bill Bryant over at AL.com has a few of the more s interesting quotes from SEC media days. How did I miss that Ole Miss is getting rid of their old mascot, Colonel Reb? And they are considering replacing him with an animal that gives out Candygrams (Telegram)? Weird.

4) Tide Sports (for some reason Alabama sites cover a lot of college football) has an article about Joker. It is a little dated, but it is nice to see comments like this:

(W)e want to win in the community by doing community service,” he (Joker) said. “We want to mold our young men into being productive citizens so that some day they may have a positive contribution to society.”

Kind of a big deal when you see some of the turmoil in other football programs.