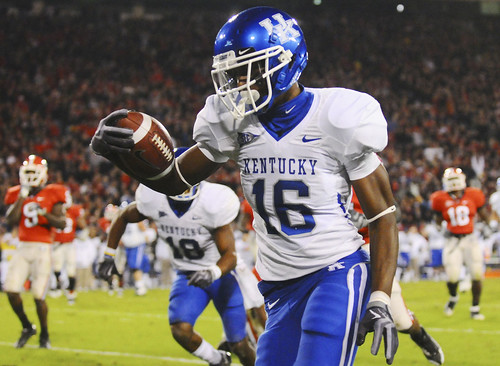 Through the years, Kentucky’s wide receivers have embodied a certain Rudy-esque quality. An abundance of toughness and moxie….a deficit of legitimate division-one size. Guys like Randy Wyatt, Clyde Rudolph, Kurt Johnson and Brad Pyatt, though productive players, looked more like they belonged in the silks at Keeneland than on an SEC football field. Even Kentucky’s top two all-time statistical leaders, Craig Yeast and Derek Abney, played well south of the six foot barrier. General Joker Phillips himself played wideout for the Cats in the early 80’s at a modest 5’9″. The 2010 receiving corp represents a radical turn from convention for the Cats, who will have up to five wideouts of 6’4″ or taller in the rotation. The question, of course, is whether the increase in stature will yield an increase in production.

There is no question that Phillips wants to improve Kentucky’s passing game. Fans who criticized his “conservative” play calling the last two seasons would do well to consider the resources at his disposal. The 2008 and 2009 Wildcats were blessed with dynamic running backs, solid offensive lines, a road grader at fullback and comparatively strong defenses. Those same teams were sorely lacking in deep threats or established quarterbacks, much to the chagrin of the “throw the ball downfield, Joker!” types at the stadium. I would suggest that 9 out of 10 similarly situated coaches would have subscribed to the same ball-control approach. (I’m looking at you, Hal Mumme.) Yet it is established that when given the appropriate tools, Joker will look to open things up. In 2006 and 2007, Kentucky led the SEC in offense, and threw the ball frequently, and more importantly, efficiently. Kentucky completed 468 passes to its receivers and tight ends during that two year span as compared to 186 in 2008 and 2009. It appears, then, that Joker is inclined to tailor his offense to his personnel. With the new super-sized receiving corp, I look for the passing game numbers to trend towards Woodson era numbers in 2010.

Randall Cobb 5-11, 191 Jr. Alcoa, TN (Alcoa)
The little guy in Kentucky’s starting rotation is, quite simply, Kentucky’s best player, and has been since he set foot on campus. Because Kentucky is not one of the league’s high profile programs, he also remains the conference’s most underrated player. This is despite being named First Team All Conference by the AP in 2009. Cobb, voted MVP by teammates following the 2009 season, led the Cats in receiving with 39 catches for 447 yards and 4 touchdowns. Yet that tells only a fraction of the story. Cobb was also second on the team in rushing with 573 yards per game and 10 touchdowns. He finished 2nd in the conference in touchdowns, 3rd in punt returns and 4th in all purpose yardage. Throw in his devastating blocking, and Cobb may be the most complete player in the nation. He should only improve as he now enters his second season as a full time wide receiver.

The Cats have enjoyed great success with Junior College receivers in recent years. (Steve Johnson, Aaron Boone, Chris Bernard, etc.) Almost without exception, these players made dramatic leaps from their first to second years. Johnson, for instance, went from 12 catches his first season in Lexington to 60 catches in his second season. (Bet our loyal Card fan readers wish it was 59.) Matthews was solid in 2009 with 32 catches for 354 yards and 3 touchdowns. Barring injury, I would be surprised if he doesn’t post at least 50 catches in 2010.

There was no bigger surprise in 2009 than La’Rod King. King came in a lanky, and largely unheralded, converted high school quarterback who everyone assumed was destined for a redshirt. Despite that, King’s size and willingness to fearlessly work the middle of the field proved critical to the Cats last season. Though recording just 10 catches for 142 yards, King made big plays down the stretch, including a one-handed touchdown grab in the upset win against Georgia in Athens. Like Cobb, King has vast potential as he continues to learn the subtleties of the position.

Gene McCaskill, Aaron Boyd, EJ Fields and Matt Roark are each entering their third years with the Kentucky program. McCaskill has the most experience (25 career games played, 10 starts). Boyd has the loftiest expectations (state’s #1 prospect in 2007). Fields has the worst luck (missed each of the last two seasons with separate pre-season injuries). And Roark has the most random stat (6 career catches, 5 career blocked kicks).

The talk of the offense during the Spring was redshirt freshman Brian Adams. Adams, a 6-4, 217 pound specimen out of Gainesville, Georgia missed last season after suffering a potentially fatal blood clot, an episode from which he has fully recovered. Adams, who also plays baseball for the Cats, has exceptional ball skills, and is remarkably fast despite his size. In fact, receivers coach Tee Martin referred to Adams during the Spring as the Cats’ fastest receiver. Look for Adams to be on the field for meaningful snaps immediately.

Jacob Tamme is entering his third year with the Indianapolis Colts, and Kentucky has yet to really replace him. But while there are no sure things entering the 2010 season, there is also no shortage of candidates. Nick Melilo, a 6-2, 234 pound junior, is the leading returning pass catcher at the position with a modest 5 catches for 44 yards. He will compete with highly regarded redshirt freshman Anthony Kendrick, Boyle County’s Jordan Aumiller, and Colorado transfer Ryan Wallace, all of whom have good size and potential, but have yet to take a snap for the Wildcats. The darkhorse here is incoming freshman Alex Smith from Lakota West High School in Cincinnati. Smith, a last minute addition to Kentucky’s 2010 recruiting class, was a 4 star prospect considered to be the eleventh best tight end in his class. If he can pick up the system, he will likely play early.

Kentucky does not have the talent at receiver it had in 2007, when the Cats averaged 37 points per game behind 4 professional-level pass-catchers. Still, the Cats look to have their best foundation since those heady days. Cobb is the most dynamic player in the conference, and is currently causing defensive coordinators around he league to swig Mylanta and update their rÃ©sumÃ©s. Matthews is a Stevie Johnson clone who began to find his game late in 2009, and will likely follow Johnson to the pros following the season if Kentucky’s quarterbacks can deliver the ball. King, Adams, Boyd and Roark will dwarf every defender who attempts to cover them. The tight end position is a question mark, but it just takes one productive player to provide an answer. The stability of the Kentucky program on the footsteps of the Rich Brooks tenure is demonstrated in these types of situations. Unlike the shoestring rosters of the past, the staff now has the luxury to place at least 5 competent major college athletes in competition with one another. It appears likely that the one who claims that spot will have earned it, and will generate production at the position in 2010.

Next up: Offensive Line