When it comes to sports, winning can cure, disguise and make up for a lot of shortcomings. When the wins are rolling in, everyone is happy. A coach’s faults can be overlooked when his team is consistently winning. Just ask anyone who has ever considered hiring or has hired Bobby Petrino. A coach can be the most likeable human being in the world, but if he can’t produce in the results category, his job is in jeopardy. If unhappiness and unrest among the fans is a major problem, the most reliable and trusted medicine is a steady dose of winning.

Kentucky’s football team sits at 1-5 on the season. Winning has clearly been a missing part of the equation for Kentucky football fans this season. That much we can all agree upon. What else has been missing though? Winning aside, (which is obviously one of the best parts about being a fan of a team at any level, in any sport) for Kentucky football fans, at least 2 (I have no doubt a larger list could be compiled) of the other best parts about being a fan have been non-existent this season.

1. A sense of camaraderie/unity among fans 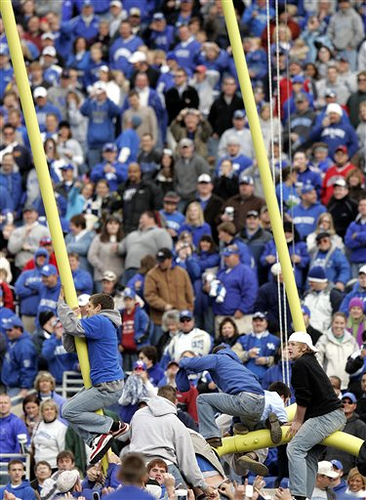 Perhaps one of the most disheartening and painful parts about being a Kentucky football fan this season has been the inability for the fan base to agree upon anything. Everyone has an opinion, most of which are fairly passionate to say the least, but the problem is the opinions are on such opposite ends of the spectrum that it’s hard to see eye to eye and feel any sense of unity. And the really wild part is that the fan base is not split down the middle in simply two directions. It’s not black and white; it’s not yes and no. The splits and cracks are running in multiple directions. Some people want a new coach. Some people believe Joker Phillips deserves more time. Some people who can agree that we need a new coach, can’t agree on who the new coach should be. Some people think the issues surrounding UK football can be fixed with more financial support. Others think that the cards are stacked too high against success due to in-state talent and the elite level of other historically great SEC programs. Some fans think the solution is not showing up to games and not buying season tickets. Others think the team and players deserve support no matter what the circumstances. Some people think the media should be more supportive of the program/coaches and attempt to rally the fan base. Others think the media should be more critical of the program/coaches. If you don’t believe the fan base is flooded with opposing opinions and is currently torn in different directions, just read our comment section, listen to call-in shows or pick up the thing my neighbor’s dog pisses on and you can find the evidence for yourself. No one agrees on much of anything.

One of the most incredible parts about being a fan of a team is the bond you feel with fellow fans. When you see a fan wearing a blue Kentucky basketball shirt, you can throw them a 3 goggle and just know that you are both currently bursting with pride and passion for your team. You don’t have to worry about whether or not they think John Calipari should be the coach or whether or not things are going well for the program. If you see a fellow Kentucky football fan right now, often times the first interaction is not a sense of unity, but rather a list of questions and a spewing of opinions about where to go from here. 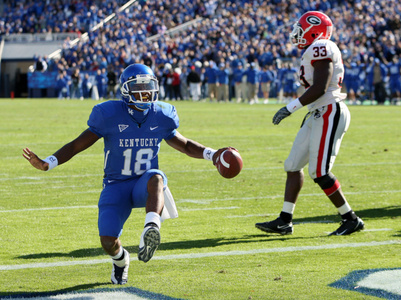 Randall Cobb. Jared Lorenzen. Danny Trevathan. Tim Couch. Those are just a few of the names that I think fall into the category of beloved/recognizable players who have worn the Kentucky uniform. Those 4 guys weren’t always on the most successful Kentucky football teams. With that said, they were often the focal point of fans’ attention. They were, for lack of a better term, the “signature players” for their teams. Last year, even though Kentucky didn’t make a bowl game and had a mediocre season, Danny Trevathan was a bright spot and probably the most well-known player on the roster.

This season we just haven’t had that player. And anytime it feels like we might be finding one, he gets hurt. Max Smith was the bright spot of the first few games, something for fans to potentially hang their hat on. Then he went down. Aaron Boyd made some believers with a career game against Kent State. Then Boyd disappeared. Patrick Towles provided a glimmer of hope– though we can’t be sure it would have been sustained– for such a role in his short-lived performance on Saturday. I think that nearly every Kentucky fan hopes that at some point, whether it’s now or in the future, Towles can be that type of signature player for Kentucky. Once again, a glimmer was given– and then Towles went down.

This team simply lacks an identity, and certainly lacks an extremely identifiable player. Sure, there are plenty of talented youngsters on the team, but whether it’s injuries, inconsistency, or coaching decisions– no single player has stood out for fans to rally around in a way that they once rallied around guys like Cobb, Couch, Lorenzen and Trevathan. It’s fun to have that type of player, who fills that type of role. Just ask Redskins fans about RGIII. We just don’t have that this season…at least not yet.

Let me make it clear that I am not blaming any of this on Kentucky football fans. I hate it for everyone (myself included) that we are all missing out on 2 of the best parts about being a fan. Simply winning could go a long, long way to cure either of these woes.