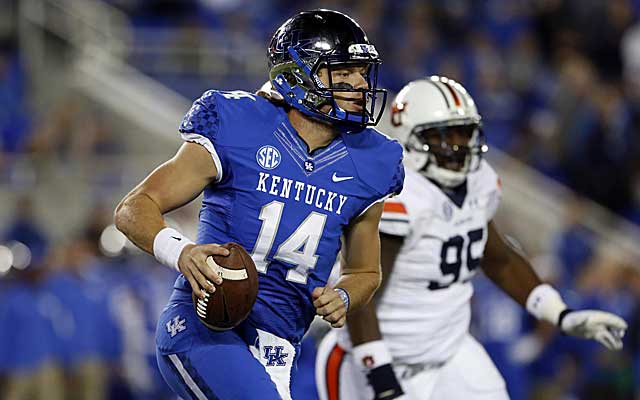 Welcome to week two of the football ranking round up. The only spot on this very website where we scour the world wide web to find anyone with the drive to rank all 128 teams and then average their scores.  Following a tough loss to Auburn, the Cats have slid to almost the exact middle of college football but looking at the rest of the season there is still plenty of room to move up. Here’s how the Cats and their opponents are ranked:

The Dawgs and the Gators both have a bye this week to prepare for their SEC-east defining game on Halloween. Georgia did not look impressive in a trap game against Missouri but still managed to win. Can QB Greyson Lambert do anything against Florida’s secondary? Doubtful.

Mississippi State has won six in a row over the Cats and needs just another win to be bowl eligible. UK has a tough road to hoe to keep that from happening. Dak Prescott has been a Cat Killer during his time in Starkville, in two games against the boys in blue he’s thrown for over 480 yards with three touchdowns. Luck for us, Saturday is the final time we have to face him.

The Vols head to the slaughterhouse this weekend when they travel to Tuscaloosa to face the Crimson Tide. A third loss in the SEC will likely eliminate them from any hope of winning the East.

The average margin of victory in Kentucky games this year? 5.67 points. That slim margin illustrates just how fine the line between success and disappointment can be. The Cats could easily be 6-0 but they could also be 0-6.

The Cards only wins this year have come against NC State and lowly Samford. The next few games are certainly winnable but they will close the season @Pitt and @Kentucky. U of L is in real danger of missing their first bowl game since 2009.

While Vandy has been a bit more competitive this season the ‘Dores should be out of bowl contention by the time UK travels to Nashville.

Another week, another loss for the ’49ers.

1 Comment for Kentucky Slides In the Latest Composite Rankings