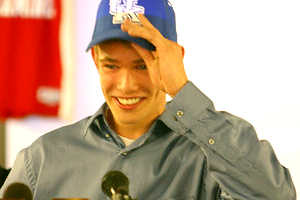 I would like to take this opportunity to congratulate the newest addition to the UK family, Jarrod Polson. As a Jessamine County native and resident, I thought I would answer all the burning questions that you readers surely have regarding the homeplace of our latest walk-on. Let’s do this Chris Tomlin style with a FAQ:

1: Where is Jessamine County?

Just south of Fayette County. It was actually part of Fayette County once. Jessamine broke off from Fayette in 1798 and that is the same year that Nicholasville was founded. Nich-Vegas is one of the two ‘cities’ within Jessamine County. The other is Wilmore.

If you are in Lexington, just find Nicholasville Road and drive until you notice that every other building is a church and the air smells like boiled peanuts and catfish.

3: Do residents have a nickname?

4: What if you don’t live in either city?

Then you are referred to simply as a redneck or ‘sir’ depending on the size of your truck’s gunrack.

At Least We Aren’t Cynthiana

6: How do you pronounce Jessamine?

Some folks like to say it like Jess-Ah-men while others (typically from Estill County) prefer Jess-uh-MINE and others ignore the ‘a’ all together and simply say Jessmen. Locals take the route that Louisville people have taken (Luh-vuhl) and refer to it as Juhzmun.

Those are very creative names.

Juhzmun people are succinct. West Jessamine is the original building and claims all the students prior to about the year 2000 when East Jessamine was built.

Well, there is the Valley View Ferry that is the oldest operational business in the Commonwealth. It can take 3-4 cars across the river in a single pass.

Yes, but it gives you one last opportunity to reconsider actually going to Madison County.

11: Haven’t you people heard of bridges?

Funny you should mention that because Jessamine County is also the home of High Bridge.

12: There is that descriptive naming again. What is so cool about it?

13: You really can paint a picture with words. Any famous people?

14: That is neat. Montgomery is pretty popular. Are there any monuments or tributes?

We put up a billboard with his likeness on it.

There is the annual JD Crow festival, the Jessamine Jamboree (Theme: It ain’t no Court Days, but it’ll do!), and Ichthus.

An annual Christian Rock concert that is held on the outskirts of Wilmore. It is quite popular despite the fact that, you know, they play Christian Rock. It is the oldest Christian music festival in the nation and was started in the 1970’s as a religious response to Woodstock.

17: Does Jessamine have an official mascot?

Yep. We call it a ‘critter’. Since official mascots are typically banned from being hunted or eaten, it was felt this was the safest route.

Nope. Now help me load up this crate of Ale-8 into my pickup and toss me a log. I have a long night ahead of me.