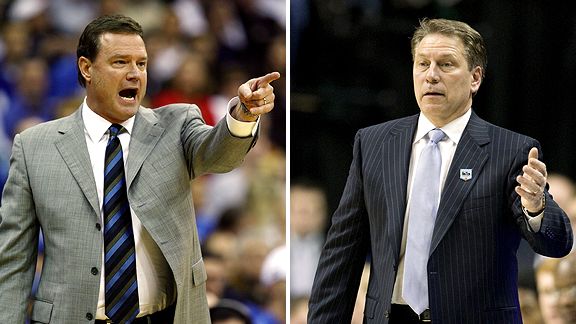 In a column earlier this week, Gary Parrish tipped his hat to Kansas’ Bill Self and Michigan State’s Tom Izzo for “scheduling aggressively.” Parrish applauded both coaches for being two of the best in the country when it comes to taking risks with the non-conference schedule and putting their respective teams to the test. Parrish also states that many other college basketball coaches across the country shy away from similar scheduling tactics in large part due to “fears and insecurities.” Parrish did admit though that both Self and Izzo are at an advantage because they are secure and established winners in no danger of being fired. The two points are very important. In a college basketball world in which you are measured as a coach by NCAA tournament appearances and wins, the margin for error can be very slim. A select few coaches are in the position to take chances on making the tournament by adding beef to the non-conference schedule. The danger for others is simply too high.

Thoughts: Most of Kansas’ neutral site games were in very close proximity to home, but going on the road to Ohio State was tough scheduling. Kansas’ home schedule didn’t necessarily have marquee opponents with big names that jump off the page, but most of the teams were solid teams with NCAA tournament experience or hope in their respective conferences.

Away: College of Charleston, Memphis

Thoughts: Other than Kentucky, Louisville’s home schedule left much to be desired. With that said, Louisville did travel for 2 true road games as well as playing 4 times away from home on neutral sites against a few tough opponents.

Thoughts: As you’ll notice, Duke manages to be one of the few teams to actually avoid a true road game. Duke did leave home for 6 legitimate opponents in neutral site games though, as well as hosting a marquee home game in Ohio State.

Thoughts: North Carolina gets credit for going on 3 true road game trips in the non-conference schedule. UNC had the most true road games of any of the teams being examined.

Thoughts: Tom Crean realllllly doesn’t like playing away from home…

Thoughts: Florida took a risk by going out west on the road against Arizona.

Thoughts: Gonzaga managed to bring a few fairly solid match-ups to the state of Washington for either home games or “neutral” games. Gonzaga’s non-conference schedule is not incredibly tough though, and that’s probably in part due to other teams not wanting to make the trip out west or host a bit of a high-risk opponent in the Zags.

Thoughts: Decent schedule all the way around with a few neutral games against decent opponents and one true road game at Duke. Ohio State also brought in a marquee home match-up with Kansas.

Thoughts: Kentucky will be playing 3 of the best teams in college basketball season in Michigan State, North Carolina and Louisville. One is neutral, one is home, and one is on the road. That’s a pretty tough and balanced schedule. The other home games on the schedule do leave something to be desired though.

1) Take a look at the home schedules for each and every team listed. Other than maybe 1 or 2 (mostly 1) marquee opponents, fans of other teams are left with the same type of home schedule as Kentucky fans. The games aren’t overly exciting, but we aren’t the only ones looking at that kind of home schedule.

2) Playing neutral site games is clearly becoming a more advantageous option than going on the road for a true road game.

3) The biggest difference right now between Kentucky’s overall home schedule when compared to some of these other teams is that the SEC is considerably down as of late. The SEC schedule only provides a few highly anticipated home games each season now. Some of the other conferences such as the ACC, Big 12, Big 10, etc. are strong overall, and therefore at least 4-5 of the home games during the conference season are ones that fans get excited about.

27 Comments for Judging the non-conference scheduling across the board